This is a high-level initial proposal. Attention now turns to Congress to develop an infrastructure package that can pass the House and Senate. Whereas the American Rescue Plan was largely pre-negotiated with Congress, leading to a swift passage, the forthcoming effort to pass a multi-trillion-dollar infrastructure package will be a lengthier process involving the input of many congressional committees.

Congress’s efforts to reauthorize the FAST Act are also underway, with the House and Senate authorizing committees hard at work on transformative legislation in advance of the September 30th deadline.

Senate Republicans have introduced a $568 billion infrastructure proposal that is much narrower in scope and size than the American Jobs Plan. It would serve as a reauthorization of surface transportation programs with increased highway funding levels plus funding for broadband, water infrastructure, and airports. It is primarily a messaging proposal and will not receive serious bipartisan consideration.

What remains to be seen is how the separate infrastructure package and FAST Act reauthorization tracks move and which legislative procedure will be used for the infrastructure package. Utilizing the budget reconciliation process, the most likely outcome, significantly impacts the types of funding and limits how prescriptive Congress can be in setting policy and directing new funding.

2021 creates the best opportunity in decades to pass a transformative infrastructure funding package, however, major fights lie ahead over “if” and “how” such a package should be paid for, as well as what types of investments are included in such a package. Expect this process to play out into the fall of 2021. 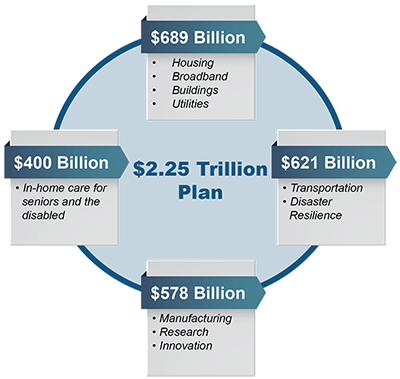 The funding details in the plan demonstrate the Administration’s priorities. When looked at in conjunction with H.R. 2, the Moving Forward Act, which was a $1.5 trillion infrastructure package passed by the House of Representatives last year, one can see where congressional and Administration priorities lie.

$50 billion for highways with an asset management focus is modest in comparison to the maintenance backlog and the levels of funding for other modes in the proposal. It also includes $25 billion to support clean-air and multi-modal existing and proposed programs.

$40 billion for a bridge investment program is substantial, far above the current amount of federal funding obligated for bridges.

Through numerous programs the plan proposes a massive increase in funding for active transportation and ‘Vision Zero’ focused investments.

Over $160 billion for electrification of vehicles, the majority for consumer rebates, but also major investments for EV infrastructure and transit and school bus electrification.

Transportation funding will likely flow through a mix of existing formula programs, existing discretionary grant, and new grant programs. It is unlikely an infrastructure package will include earmarks. There will also not be the strict ‘shovel-ready’ requirements which were applied to the 2009 ARRA funding. This means agencies should be positioned to seek funding at the regional, state, and federal levels. In anticipation of this scenario agencies can be doing multiple things to be in an advantageous position for future funding:

Identify Priority Projects and Programs | Consider how they address the key themes of an infrastructure package. Their eligibility and competitiveness may depend on themes such as resiliency, carbon reduction, state of good repair, and equity.

Project Readiness | Likely impactful for some of the funding, so overlaying the themes above with project schedules can help agencies develop a priority list of projects in anticipation of multiple funding opportunities with varying timeframes.

Earmarks Likely Not Included | Educate your congressional representatives about your priority projects and how new funding programs should be crafted to ensure eligibility.

Legislative developments with the infrastructure package will be occurring in the spring and summer and we will continue to provide updated information and insights as the package moves forward in Congress. 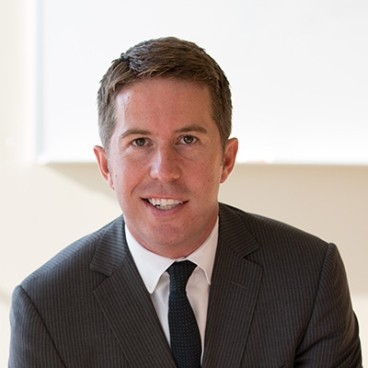 Andrew’s political and transportation policy and funding expertise stems from over a decade working in Congress on federal transportation issues. While working in the United States Senate, he was a primary author and negotiator of the last two federal surface transportation bills, the FAST Act in 2015 and MAP-21 in 2012.