The ENR Global Best Projects Awards identify and honor the project teams behind outstanding design and construction efforts of the past year, with the distinct rule that at least one firm involved in the project must be working outside of its home country. A record number of 32 projects located in 20 different countries around the world were submitted for the 2019 awards competition.

TYLI’s scope of work comprised numerous improvements to the airport landside and airside transportation infrastructure, as well as extensive utility works. This included the addition of landside multimodal transportation facilities that consisted of four miles of roadway corridor, terminal upper and lower vehicular drives, two roundabouts, and a partial cloverleaf interchange connection to the existing highway system, all to support the new, signature terminal building.

TYLI also designed a new jet fuel system for Terminal 2, which included fuel hydrants for each gate and a looped jet fuel pipeline from the new terminal to the fuel storage facility. A new 5,000 gallons per minute fuel pump station and three new 25,000-barrel fuel storage tanks were also designed.

On the airside, the project included 20 aircraft parking contact positions and seven aircraft remote positions, as well as a “2 narrow body for 1 wide body” parallel taxiway system, a first in Panama. These airside improvements ensure the flexibility and efficiency of aircraft operations in and out of the terminal area.

An integrated ground transportation system was also developed to merge new and existing terminal roadways, service roads, bus terminal, cargo and delivery areas, and rental car and parking facilities. The use of more durable asphalt and concrete for the project set new milestones in Panama and Central America.

The new terminal for Tocumen International Airport was officially inaugurated on April 29, 2019. With the completion of the expansion program, the modernized airport now provides a world-class gateway to Panama and a facility that can handle approximately 25 million passengers each year. 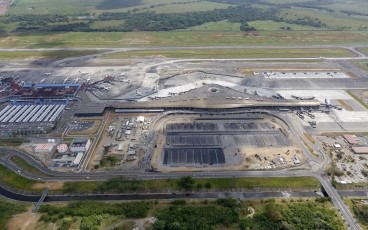