For 44 years, the Engineering Excellence Awards have recognized and honored the greatest engineering accomplishments among ACEC firms. Judged by a panel of experts from the engineering and construction industry, the entries are critiqued based on innovation; future value to the engineering profession; social, economic and sustainable design; complexity; and exceeding the client’s needs.

"These awards are a positive reflection of the professionalism, ingenuity, and commitment that our staff demonstrates to our clients each day," said Robert Radley, P.E., TYLI Senior Vice President and East Regional Director. “To earn bothDiamond and Platinum awards from ACEC New York and to bring them home to Rochester makes the TYLI staff very proud.” The Historic Erie Canal Aqueduct and Broad Street Corridor Master Plan and the Rehabilitation of Lock E-6 on the Erie Canal are two of five TYLI projects to recently receive ACEC awards, including national ACEC awards for the new The Hoover Dam Bypass, the I-64 Kanawha River Bridge in West Virginia, and the San Francisco-Oakland Bay Bridge East Tie-In structure.

TYLI created a master plan for the Historic Erie Canal Aqueduct and Broad Street Corridor for the City of Rochester. This Master Plan creates a new district in Rochester’s Center City, and is centered on the legacy of the long-famous Erie Canal. Rochester’s Historic Canal District will celebrate this engineering marvel of the 19th century; establish a water-themed sequence of public spaces; and create significant potential for private development. Plans envision the re-watering of the canal, the creation of significant public gathering space, and the return of the river crossing to its former prominence and source of civic pride. Both conceptual-level engineering and the strategic blend of three distinct positions on the future of the aqueduct were included as key components of this project. Following an extensive public involvement process, conceptual- level engineering, backed by real market analysis findings, was incorporated into the process to ensure that the diverse ideas presented were both reasonable and feasible. The result was a master plan that successfully addressed important public viewpoints.

As prime consultant for the rehabilitation of Lock E-6 on the Erie Canal, TYLI presented the New York State Thruway Authority, Canal Corporation with innovative technical solutions for the much-needed upgrade of an important landmark of engineering history. Lock E-6, located in Waterford, NY, is the highest in a series of five locks allowing navigable connection between the Hudson River and the Mohawk River. This “flight of locks” represents the largest elevation change over the shortest distance of any canal system in the world. A unique challenge for TYLI on this project was the need to simultaneously rehabilitate and update the internal operating equipment of the circa 1915 lock, while still maintaining its historic character. The special beauty of this project lies in what is hidden to the human eye: The casual observer on the Canal will never know that 21st century equipment is being utilized to operate the gates and valves of one of New York’s historical engineering wonders. 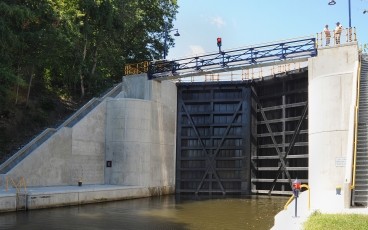