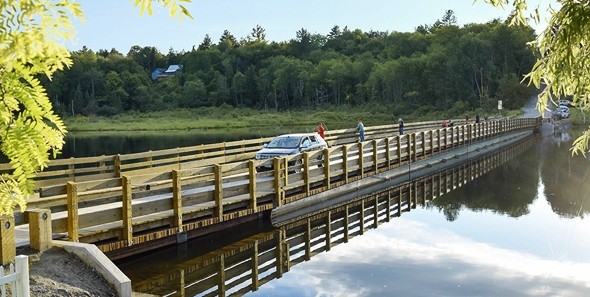 Working closely with the project owner, the Vermont Agency of Transportation (VTrans), TYLI performed an alternatives investigation for the replacement structure and carried the selected alternative through final design and submittal of plans, specifications, and estimates. Criteria included a durable, maintenance-free bridge that could shoulder highly-variable ice pressure loads, even when closed during the winter months, and the integration of modular components to aid in potential major repairs.

TYLI’s preliminary design compared both concrete and FRP for the pontoons used to support the floating portion of the bridge. VTrans selected the FRP alternate after it was determined that dredging of the lake would not be required, and that FRP pontoons could be filled with closed-cell foam for a secondary flotation system.

The approximately 321-foot-long Brookfield Floating Bridge carries one 12-foot-wide travel lane for alternating, one-way traffic and two flanking 5-foot-wide sidewalks. The articulating approach ramps consist of glued laminated timber beams. Timber was used for the deck, railing, and ramp system to echo the appearance of local historic structures. The bearings and hinged expansion plates were designed to accommodate large movements caused by lake level fluctuations. The abutments are traditional cast-in-place concrete, with one abutment supported by a shallow footing on bedrock and the other pile-supported.

“T.Y. Lin International is tremendously pleased that the Brookfield Floating Bridge has been honored with the 2016 International Bridge Conference® Arthur G. Hayden Medal,” said Robert Radley, P.E., TYLI Senior Vice President and East Region Director. “This significant local project underscores our firm’s commitment to bringing the highest levels of service, technical excellence, and innovation to every project, no matter what the size, location, or degree of complexity.”

Located along S.R. 65, the last state-owned gravel road in Vermont, and listed on the National Register of Historic Places as a contributing element to the Brookfield Historic District Rebuilt, the floating timber bridge has been rebuilt seven times since its original tied-log construction in 1820. The new Brookfield Floating Bridge opened to traffic on May 23, 2015.