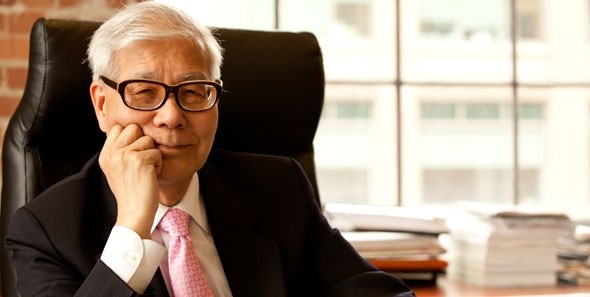 T.Y. Lin International (TYLI), a globally recognized full-service infrastructure consulting firm, announces that Dr. Man-Chung Tang, Dr-Ing, Dr-Ing-eh, D.Litt, PE, Hon MASCE and TYLI Chairman of the Board, has been awarded the 2013 Gold Medal from the Institution of Structural Engineers. Dr. Tang received the award for “his outstanding contribution to the structural design of major long span bridges in many parts of the world, exemplifying aesthetics, creativity and sustainability.” The Gold Medal is the Institution’s most prestigious Award and is presented to an individual for exceptional and outstanding contributions to the advancement of structural engineering. Dr. Tang received the Gold Medal at the Institution’s Gold Medal Address in Shanghai, China, on October 31st, where he also presented his latest paper on innovation.

Dr. Tang has over 44 years of design and construction engineering experience, working on more than 100 bridges worldwide. The author and presenter of over 150 technical papers on bridge design, construction, and materials, he is recognized not only for his tremendous overall contribution to the bridge design industry, but also for the quality and innovation of his individual designs.

Among Dr. Tang’s designs are the Shibanpo Bridge and the Caiyuanba Bridge, two world record-holding bridges that span the Yangtze River in Chongqing, China and the first full-scope bridge projects that China has ever awarded to a foreign (American) company. He also designed the dramatic, swirling profile of the Sanhao Bridge in Shenyang, China, an industry-first structure called a “partially cable-supported girder bridge.”

Dr. Tang was elected to the National Academy of Engineering in 1995 for his contribution to the advancement of cable-stayed bridges. He served as chairman of the American Society of Civil Engineers (ASCE) committee on cable-suspended bridges, and published a definitive guideline for the design of cable-stayed bridges used today by engineers worldwide. He is also a founding member of the Post-Tensioning Institute Stay Cable Committee and past president of the American Segmental Bridge Institute, which presented him with the 1995 Leadership Award for his contribution in the advancement of cable-stayed and concrete segmental bridges.

In June 2000, Dr. Tang was elected as a Foreign Member to the Chinese Academy of Engineering, the highest honorary and advisory organization for engineering and technology in China. He was also the 2008 recipient of the Friendship Award, which is China's highest award for foreign experts who have made outstanding contributions to China's economic and social progress. Among his other industry awards are the ASCE Outstanding Projects and Leaders’ (OPAL) 2010 Lifetime Achievement Award for innovation and excellence in civil engineering design and the International Association of Bridge and Structural Engineering’s 2010 International Award of Merit in Structural Engineering for outstanding contributions in the field of structural engineering, with special reference to “usefulness for society."

The Institution of Structural Engineers is the world's leading professional body for qualifications and standards in structural engineering. For more information please visit their website.