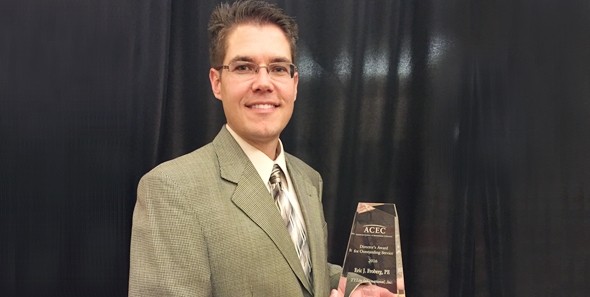 T.Y. Lin International (TYLI), a globally recognized full-service infrastructure consulting firm, announces that Eric Froberg, P.E., LEED AP, TYLI Associate Vice President and Branch Manager for the firm’s New Mexico operations, has been honored with the 2016 Director’s Award for Outstanding Service from the American Council of Engineering Companies - New Mexico (ACEC-NM). This special award recognizes an ACEC-NM member who has made noteworthy contributions to the growth and welfare of the organization and the industry. A member of the ACEC-NM Board of Directors, Froberg was presented with the 2016 Director’s Award for Outstanding Service in front of more than 300 members of the engineering industry, including consultant peers, clients, state legislators, and other honored guests, at the annual ACEC-NM Awards Gala on April 29, 2016. He was also installed as an ACEC State Director.

Highlighted at the awards presentation were many of Froberg’s accomplishments on behalf of ACEC-NM. These include his participation on numerous liaison committees, such as the Water Utility Authority, Bernalillo County, the New Mexico Department of Transportation (NMDOT), and Tribal Affairs. He also helped resurrect the City of Rio Rancho Liaison Committee and assumed the role of Chair of the City of Albuquerque Liaison Committee. Additionally, Froberg sits on the ACEC-NM Government Affairs Committee, serves on the Professional Technical Advisory Board, and remains active with the organization’s Young Professionals group.

Froberg joined TYLI in 2010, when the firm opened an office in Albuquerque, New Mexico. Since then, he has been responsible for new business development, business planning, client management and marketing, quality assurance/quality control management, and training for entry-level engineers and designers. In addition, he has served as the TYLI Project Manager for all New Mexico projects, including the Osuna Road Widening and Channel Road Improvement projects for the City of Albuquerque, the Rio Grande Boulevard Bikeway Improvements for Bernalillo County, and the NM 170 (NM 574 and the Colorado State Line) Phase 1A Location Study for NMDOT. In 2013, Engineering News-Record Southwest named Froberg to its “Top 20 Under 40”, a prestigious list of key design and construction industry individuals working in Arizona, New Mexico, and Nevada who represent “outstanding examples of leadership, drive and teamwork.”