Taijiang Bridge, Sanming, Fujian Province, China
Completed in December 2010, the Taijiang Bridge in Sanming, Fujian Province, China was designed based on the concept of the partially cable-supported girder bridge. This design concept fully utilizes the capacity of both the cable-stayed system and the bridge girder, in contrast to a conventional design concept that does not employ the girder in a cable-supported structure to carry global loads. This unique and aesthetically pleasing new signature cable-supported bridge with a steel arch-shaped tower was constructed to provide a landmark for residents and visitors to admire.

Lowry Avenue Bridge, Hennepin County, Minnesota
Hennepin County’s Lowry Avenue Bridge has been a vital Mississippi River crossing for over 100 years. When unstable foundations led to permanent closure of the old bridge in 2008, the SRF/T.Y. Lin International Team met the challenge of re-opening this important transportation link by designing a steel through arch in a ‘basket handle’ configuration for the new river span, with post-tensioned concrete box girder side spans and approach spans. Completed in October 2012, the new crossing accommodates both vehicular and bicycle/ pedestrian traffic, minimizes impacts to the river and adjacent land use, and provides a sustainable landmark structure for Hennepin County, the City, and surrounding neighborhoods.

Rose Creek Bicycle and Pedestrian Bridge, San Diego, California
Completed in April 2012, the 360’ clear-span bridge fills a gap in the existing regional Class-I bicycle network. The project is a vital link for cyclists and pedestrians, as it provides safe and convenient access between the beach communities to the west, to the residential and business districts to the north, east and south. The design of this cast-in-place prestressed cantilevered box girder bridge is unique to California and provides San Diego with a landmark structure.

Capturing the Bayonne Bridge in 3D project, Bayonne, New Jersey
TYLI, working in conjunction with the Port Authority of New York & New Jersey (PANYNJ) and the project design team, was tasked with the effort to develop a comprehensive model of the existing bridge—specifically the two existing towers and the upper and lower arches. Due to a highly aggressive schedule, TYLI proposed an innovative approach combining the dual efforts of conventional CADD preparation of structural elements in conjunction with utilization of cutting edge technology—high-definition survey (3D laser scanning). 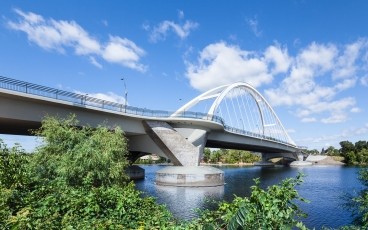