T.Y. Lin International (TYLI), a globally recognized full-service infrastructure consulting firm, announces that TYLI joined city officials and residents on June 11, 2021, to mark the grand opening of the new RiverEdge Park Pedestrian Bridge over the Fox River in Aurora, Illinois. The firm was contracted by the City of Aurora to design the signature pedestrian-bicycle bridge, which is a critical part of the master plan to redevelop the City’s historic downtown district.

TYLI’s services for the project included bridge architecture, aesthetic lighting design, structural engineering, and electrical engineering. Initially, the firm developed eight bridge concepts along four alignment profiles. The final bridge design, which was developed through a series of public meetings and refinements with City staff, is a seven-span concrete girder structure with a graceful S-curve alignment.

The bridge superstructure features a central beam “spine” from which two pathways cantilever on either side. The segregated twin pathways allow the faster commuter bicyclists to be safely separated from the slower pedestrians. From the riverbanks, the pathway decks gradually rise to the top of the girder at the midspan, where overlooks and benches offer scenic views of the Fox River and downtown Aurora.

The RiverEdge Park Pedestrian Bridge unites the new RiverEdge Park on the east side of the river with existing neighborhoods, redeveloped parks, and trails on the west side. The bridge also allows non-motorized commuters to connect across the river to the recently improved, multimodal Aurora Transportation Center. 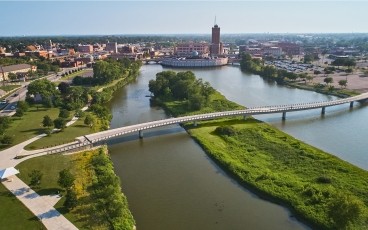