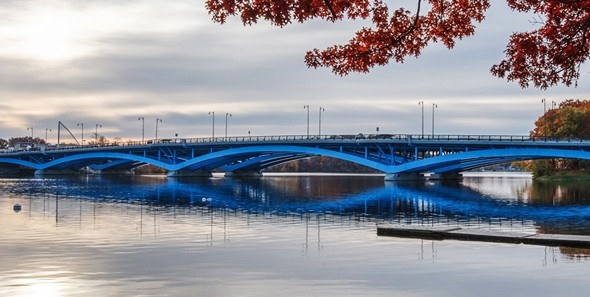 The Burns Bridge is a two barrel steel arch bridge that consists of two separate structures for eastbound and westbound traffic. Both structures carry three traffic lanes, a bike lane, and a pedestrian walkway with scenic overlooks of the lake. Each structure is an 870-foot-long, five-span, open spandrel steel-tied deck arch, supported on two concrete abutments and four perched pile caps.

During the bid phase, TYLI introduced two innovative design features that significantly improved the efficiency of the bridge structures and facilitated accelerated construction. The first innovation was the use of post-tensioned ties. While not typically applied to steel structures, the use of post-tensioning reduces arch flexure by introducing forces and deformations that counteract the effects of permanent loads. The ties were designed using corrosion protection and anchorages similar to stay-cable systems. Additionally, since the ties follow the deck profile, custom details were also developed.

TYLI’s second modification made the foundations easier and faster to build. The foundations for the Burns Bridge consist of concrete-filled steel pipe piles supporting perched pile caps. The pile caps were cast on precast soffit slabs supported on the piles, eliminating the need for cofferdams. Since the tie post-tensioning balances the horizontal component of the arches, the foundation could be made less massive and more flexible than traditional foundations with pile caps at the mudline.

In addition to the 2016 NASTO America’s Transportation Award, other industry awards won by the Burns Bridge to date include the 2016 Prize Bridge Award (Medium Span category) from the National Steel Bridge Alliance, the 2016 Public Works Project of the Year Award from the American Public Works Association, the 2016 Gold Award from the American Council of Engineering Companies of Massachusetts, and the 2015 Gold Award for Highways and Bridges from the Design-Build Institute, New England Region.