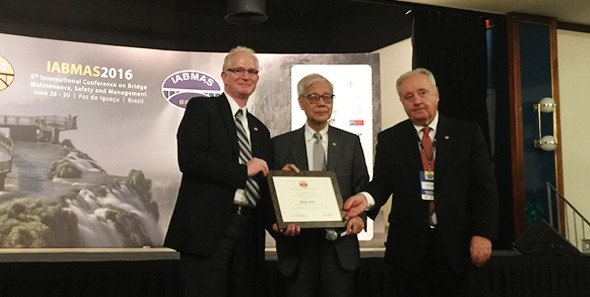 T.Y. Lin International (TYLI), a globally recognized full-service infrastructure consulting firm, announces that Marwan Nader, Ph.D., P.E., TYLI Senior Vice President and Technical Director for the firm’s Bridge Line of Business, has been honored by the International Association for Bridge Maintenance and Safety (IABMAS) with the prestigious 2016 IABMAS Senior Prize. This award is presented biennially to a bridge engineer over the age of 46 who has demonstrated distinguished achievement in the areas of Bridge Maintenance, Safety, Management, Assessment, and Life-Cycle Cost. Nader accepted the 2016 Senior Prize “in recognition of significant contributions to bridge engineering” at the Gala Dinner of the IABMAS 8th International Conference on Bridge Maintenance, Safety and Management on June 29, 2016 in Foz do Iguaçu, Paraná, Brazil

Nader has over 25 years of experience in all phases of bridge design and construction engineering and has led TYLI teams on some of the world’s most complex and iconic bridge projects. Recognized worldwide as an industry leader in the design and application of seismic engineering technologies, he recently served as Engineer of Record for the design of the Self-Anchored Suspension Span (SAS) of the San Francisco-Oakland Bay Bridge New East Span (East Span), which is located in a high seismic zone. The award-winning East Span is the longest single-tower SAS in the world and the world’s widest bridge.

Nader also served as Project Manager and Engineer of Record for the detailed design of the cable dehumidification system for the main suspension cables of the William Preston Lane Jr. Memorial (Bay) Bridge, in Anne Arundel and Queen Anne’s Counties, Maryland. The first such cable dehumidification system to be installed in North America, the project comprised the design of injection and exhaust sleeves, a cable wrapping, and a cable sealing system, as well as the design of the sizing of the dehumidification units based on project demands. Overseen by Nader, this project represents a significant advancement in bridge rehabilitation and preservation in order to extend the service life of cable-supported bridges.

Nader is currently serving as Lead Design Engineer for the New Champlain Bridge in Montréal, Canada. Designed for maximum durability and a 125-year design life, the new cable-stayed bridge will replace the existing Champlain Bridge over the St. Lawrence River and serve as a modern gateway to the historic city. The signature bridge will feature an approximately 550-foot-tall concrete tower and stay cables in a harp arrangement. The design includes two three-lane corridors for vehicular traffic and a two-lane transit corridor capable of accommodating a planned light rail transit system, as well as a multiuse path for pedestrians and cyclists. The New Champlain Bridge is the cornerstone of the Government of Canada’s New Champlain Bridge Corridor Project, one of the largest infrastructure projects in North America.

Since March 2014, Nader has served on the University of California, Berkeley, Department of Civil and Environmental Engineering (CEE) Advisory Council, a select committee of professional engineers, business leaders, academic and higher education leaders, and government and policy officials who are dedicated to contributing to a dynamic and robust civil and environmental engineering profession. In 2015, he was honored as an inductee into the 2015 Class of the CEE Academy of Distinguished Alumni. Nader also won a 2014 Distinguished Alumni of the Year Award from the American University of Beirut in Lebanon, where he received a Bachelor of Engineering with Distinction in 1986.