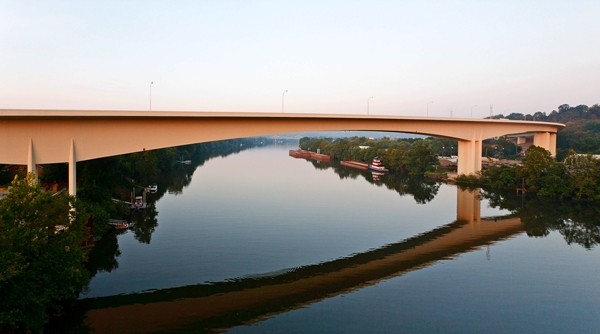 The Mike O’Callaghan-Pat Tillman Memorial Bridge/Hoover Dam Bypass was specially recognized with an Outstanding Achievement Award, the first of its kind to be awarded in the history of the PCA Bridge Design Awards. The jurors noted, “The bridge designers have gone above and beyond to provide a beautifully engineered and constructed bridge. It stands in a class by itself.”

Mike O’Callaghan–Pat Tillman Memorial Bridge/Hoover Dam Bypass, Clark County, Nevada and Mohave County, Arizona
A dramatic new concrete arch joins the setting of the historic Hoover Dam, spanning the Black Canyon between the States of Arizona and Nevada. The 1,900-ft-long Colorado River crossing is the centerpiece of the $240 million, four-lane Hoover Dam Bypass Project. The project includes 3.5 miles of new approaches on both sides of the river and seven other bridges. The Program Manager for the project was the Central Federal Lands Division of the U.S. Federal Highway Administration (CFLHD). The project design team was comprised of HDR, Jacobs Engineering, and TYLI. TYLI led the design of the landmark Colorado River span which is the highest and longest, single-span concrete arch bridge in the Western Hemisphere and features the tallest precast segmental columns in the world. The innovative hybrid structure is designed to complement the dam with a high-performance concrete arch while limiting the load demands with a modern steel superstructure. It is the first steel-concrete hybrid arch bridge in the U.S. The bridge officially opened to traffic on October 19, 2010.

I-64 Kanawha River Bridge, Kanawha County, West Virginia
The Kanawha River Bridge is a record-setting, low cost, and aesthetically pleasing structure built as part of the I-64 Widening Project. The overall bridge length is 2,975 ft, including a record 760 ft main span. The segmental box girder structure crosses over railroad tracks, Dunbar Avenue, the Kanawha River back channel, Wilson Island, the Kanawha River main channel, Riverside Drive, and MacCorkle Avenue. TYLI was the prime consultant providing design and construction support services for the West Virginia Department of Transportation, Division of Highways. The superstructure was built using the balanced cantilever construction method with cast-in-place segments supported by form travelers. Bridge construction was completed on schedule and the structure was opened to traffic on July 31, 2010. 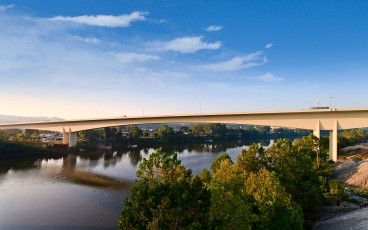