T.Y. Lin International (TYLI), a globally recognized full-service infrastructure consulting firm, announces that the new West Gates at Tom Bradley International Terminal (TBIT) at Los Angeles International Airport (LAX) in California has received a 2021 National Award of Merit (Aviation category) from the Design-Build Institute of America (DBIA). As a critical member of the design-build team led by the Turner/PCL Joint Venture and Corgan Associates, Inc., TYLI served as the primary structural design consultant and Engineer of Record for passenger and baggage and utility tunnels and a new north-south taxiway.

Located just west of TBIT, the five-level, 15-gate, 750,000square-foot West Gates facility is the latest endeavor in Los Angeles World Airport’s $14.5 billion modernization plan for LAX. The goal of the project is to improve connections to Los Angeles’ regional transportation system and promote economic growth for the city and its environs.

Design challenges included constructing the tunnels under an active taxiway and ensuring that tunnel construction did not delay operations at one of the busiest airports in the United States. TYLI’s solution was to have construction take place in two distinct stages. The firm also fast-tracked the design of the tunnels, coordinating closely with the contractor to meet tight schedule demands.

Since the tunnels are located in a high seismic area, TYLI also performed soil-structure analysis to evaluate the seismic demands on the tunnels. This intensive raking analysis considered two seismic hazard levels, the 475-year return period and the 2,475-year return period. TYLI also designed the tunnels to support the weight of an Airbus 380-900 or its equivalent, in addition to the self-weight, backfilled soil, and taxiway slab loading.

TYLI’s Aviation and Bridge sectors collaborated on this project due to the wide range of the design. For example, the primary design for the tunnels was provided by the firm’s bridge experts. Although bridges were not part of the project, the required large dimensions, the use of concrete columns, and the unique seismic evaluation for the tunnels matched with the Bridge sector’s expertise.

Added Richard A. Waters, P.E., TYLI Senior Vice President and Director, Aviation Sector, “We thank the Design-Build Institute of America for honoring the new West Gates at Tom Bradley International Terminal with a 2021 National Award of Merit. It is our privilege to have been part of the Turner/PCL Joint Venture and Corgan team and to have played a vital role in delivering a project that reinforces Los Angeles International Airport as a premier, 21st-century travel destination.”

As a National Merit Award Winner, the new West Gates at TBIT will now compete to be named an Excellence Winner (the top project in their category) and DBIA’s Project of the Year, to be announced in November 2021 at the annual Design-Build Conference & Expo. 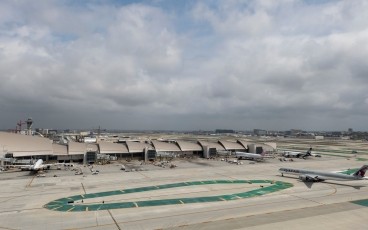