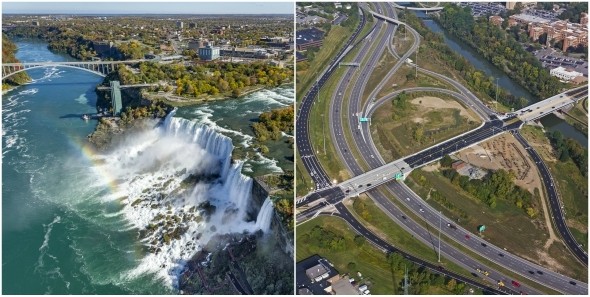 T.Y. Lin International (TYLI), a globally recognized full-service infrastructure consulting firm, announces that two TYLI projects have won Diamond Awards in the American Council of Engineering Companies New York (ACEC NY) Engineering Excellence Awards (EEA) competition. The Niagara Falls State Park Transformation Initiative in Niagara Falls, New York, won in the Special Projects Category. The I-390 Interchange Improvements Design-Build Project in Rochester, New York, won in the Transportation Category. The ACEC NY EEA Awards recognize projects for complexity, innovation, and value to society. A panel of industry experts judged entries from more than 60 firms. The Diamond Award is the top honor in each category. The awards will be presented at a black-tie gala on Saturday, April 13, 2019, in the Ballroom of the Hilton Midtown in New York City. As Diamond Award winners designed and built entirely in New York State, both projects are candidates for the Empire Award, which goes to the top-rated project across all 12 categories. This award will be announced during the gala.

TYLI was the lead consultant on the Niagara Falls State Park Transformation Initiative, a massive $65 million endeavor that produced a new version of the park that harmonizes with its distinction as an international tourist destination and one of the nation’s greatest treasures. The Initiative implemented a series of more than 16 full-scale, interconnected projects across 400+ acres. Gone are the days of disrepair, undersized overlooks, inadequate pedestrian circulation, and antiquated systems. Today, the park is a thriving picture of sustainability, state-of-the-art innovation, and Americans with Disabilities Act (ADA) accessibility for its nine million annual visitors.

Deemed “a crowning achievement for all involved” by the New York State Office of Parks Recreation and Historic Preservation (NYSOPRHP), the transformation spanned five years and touched nearly every major aspect of the park to sculpt a more intimate view of its majestic beauty. All designs complement the site’s historic and natural setting while meeting the park’s contemporary needs.

TYLI orchestrated the efforts of 13 individual firms and worked in close partnership with landscape architect, The LA Group, and NYSOPRHP to design and progress the construction. Throughout construction, the park never once closed its gates. The entire park is now completely ADA accessible. The park systems, both visible and behind the scenes, are vastly more efficient and realize extraordinary savings in both cost and time to maintain them. The transformation has been a boon to the regional economy, with new hotels and restaurants opening to meet the tourist demand.

TYLI was also the lead consultant on the I-390 Interchange Improvements Design-Build Project. This $31 million project was the final in a series of improvements to alleviate delays at the I-390 and Routes 15 and 15A interchange in Rochester, New York. The project replaced the existing bridge carrying NY Route 15A over the historic Erie Canal; constructed four new ramps; eliminated two ramps; rehabilitated two existing bridges; and provided additional ramp widening and rehabilitation, as well as traffic signals, roadway lighting, overhead signage, drainage system reconstruction, Intelligent Transportation Systems (ITS), and the relocation of existing facilities. Safety and minimizing disruption to the traveling public were key components to the construction approach in this vital, heavily traveled corridor. Despite a late award date and additional delays prompted by utility companies, the team completed the project on an accelerated schedule one month early and within budget.

While the popularity of the design-build delivery method is increasing nationwide, this project was only the second instance for New York State Department of Transportation (NYSDOT) Region 4. Project innovations focused on design and construction staging. TYLI designed a three-span slant leg rigid frame structure to carry Route 15A over the popular and historic Erie Canal. Dubbed the “grasshopper” for its appearance, the unique design creates an open, airy feel for pedestrians and bicyclists while offering design and material efficiencies. The project team devised an atypical solution to foundation design for this structure.

ITS eliminated back-ups onto the mainline and alleviated traffic in this high-volume area. The team corrected geometric and safety deficiencies to improve traffic flow by eliminating heavy left-turn movements and utilizing medians. The project also enhances aesthetics and supports future economic growth, but in perhaps the most celebrated victory, it facilitates on-time arrival for the thousands who traverse this busy corridor each day.