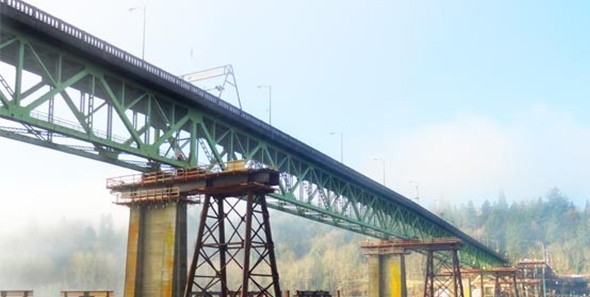 After 87 years in its current location spanning the Willamette River just south of downtown Portland, Oregon, the Sellwood Bridge was moved to the north so construction on the new replacement bridge can begin. With a bridge closure lasting only six days, the bridge was slid from its former permanent concrete supports to temporary steel piers. The old Sellwood bridge will be used as a detour facility for traffic, cyclists and pedestrians for the next 2.5 years while the replacement bridge is built.

With specific expertise in Rapid Replacement earned through projects including Oregon’s Elk Creek Bridges, T.Y. Lin International (TYLI) led the design of the detour bridge’s temporary foundations. “We started pursuit of this project only a couple of months after TYLI's Oregon office first opened back in 2004, and it was a pleasure to watch this piece of that long effort come to fruition," said Scott Nettleton, TYLI Senior Bridge Engineer. "This is the closest thing that we bridge engineers ever get to performance art. Many thanks to the many folks throughout TYLI, Multnomah County, the contractor, and our consulting partners who all contributed to the project’s success.”

The bridge, which weighs 6.8 million pounds, was moved about 66 feet on the west end and 33 feet on the east end onto temporary supports. Traveling about six feet per hour, the bridge's 1,100-foot-long steel truss slid slowly along specially built tracks to its new location. This is believed to be the longest continuous deck truss span ever to be moved in one piece.

The bridge translation contractor used 10 sliding jacks, 40 lifting jacks and a central control system to safely move the bridge to its new location – a technique called Rapid Replacement. Using Rapid Replacement reduced the overall project length by about a year, saved upward of $10M and is safer for those on the job because construction is separate from the traffic flow.