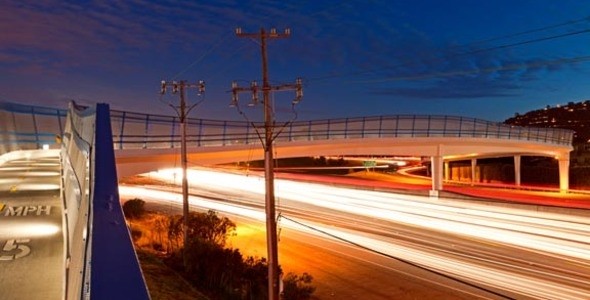 T.Y. Lin International (TYLI), a globally recognized full-service infrastructure consulting firm has completed the Ralston Avenue Bikeway Overcrossing, a pedestrian and bicycle bridge, in Belmont, California. The $7.3 million dollar project features a Class I, at-grade bikeway along the north side of Ralston Avenue, as well as an overcrossing bridge across Route 101.

Dedicated by the City of Belmont as the “Children’s Bridge,” the project links the residential neighborhoods located west of Route 101 with the Belmont Sports Complex, located east of Route 101.

The official name of the bridge reflects the contribution of the City of Belmont’s youngest citizens. Children from different elementary schools were given the opportunity to demonstrate their design capabilities and submit bridge drawings to the city's public works department, including their input on what the bridge should look like, as well as, how it would serve the community. From these drawings, TYLI engineers were able to craft the stunning design that stands today.

Previously, pedestrians and bicyclists traveling to the Belmont Sports Complex from central Belmont had to cross Route 101 on Ralston Avenue, which consisted of a complex and time consuming route that included crossing numerous streets and freeway on- and off-ramps. The bikeway not only provides a more convenient bicycle route for the users of the Sports Complex, but also serves as a more direct gateway for children to access the baseball and soccer sports fields near the Sports Complex. The project also generated a connection to the Bay Trail for recreational bikers in the vicinity of the Complex, as well as a direct connection to Redwood Shores and Foster City from Caltrain.

Based on geometric constraints for this site, TYLI incorporated sweeping horizontal curves into the bikeway design over Route 101 as well as along its off-ramp to Ralston Avenue. In addition, the bikeway contains a chain link railing that curves up and down like a wave, which complements the horizontal curves. The railing, as well as the concrete columns and superstructure, were painted to enhance the visual aesthetics.

The entire bikeway is lit with low-level lighting for bicyclist safety during evening use. Proper bicycle signage and striping have been incorporated to ensure safety along the bikeway. Aside from serving the existing bike riding community and making it an easier commute, the city hopes that others, both residents of Belmont and non-residents will be encouraged to commute by bike.

In honor of the dedication and effort of everyone involved, at the base of the bridge's eastern entrance a plaque was placed for all to admire, which reads: "Inspired by the children of Belmont and dedicated to all the people who worked tirelessly over many years to make this bridge a reality."