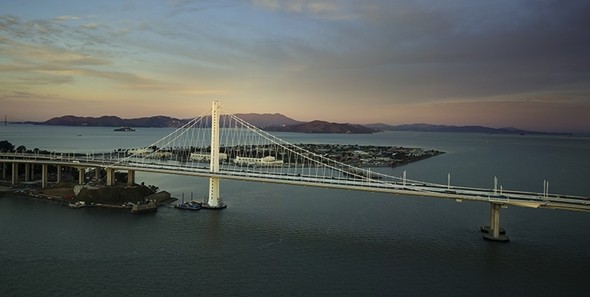 T.Y. Lin International (TYLI), a globally recognized full-service infrastructure consulting firm, announces that the San Francisco-Oakland Bay Bridge New East Span (East Span) has received an Outstanding Project of the Year Award 2016 from the International Federation of Consulting Engineers (FIDIC). FIDIC Awards are presented every year for projects that help world economies and communities to develop a higher quality of life. Working closely with the California Department of Transportation (Caltrans), California’s Metropolitan Transportation Commission, and the California Transportation Commission, TYLI, in a joint venture with Moffatt & Nichol, served as Engineer of Record for the iconic, seismically-resilient bridge.

Projects considered for a FIDIC Outstanding Project of the Year Award must be nominated by a FIDIC member firm, all of whom are associations of consulting engineers. The East Span was submitted by the American Council of Engineering Companies (ACEC). In 2015, ACEC honored the East Span with its Grand Conceptor Award, the association’s top national award for best overall engineering achievement.

The East Span is the longest single-tower Self-Anchored Suspension Span (SAS) in the world at 624 meters and the world’s widest bridge at 79 meters. The bridge consists of four seamless, interrelated elements: the signature SAS; the 1,900-meter-long Skyway that ascends from the Oakland shoreline to connect with the SAS; the 1,289-meter-long Oakland Touchdown linking the Skyway to California’s Interstate 80; and the 470-meter-long Yerba Buena Island Transition Structure, which connects the SAS to the Yerba Buena Island Tunnel.

TYLI incorporated numerous technical innovations into the design of the East Span. These include the seismic energy-absorbing shear link beams in the 160-meter-tall SAS tower, a first for the industry. Due to challenging geological conditions, the single, 1,387-meter-long suspension cable, which is the longest looped suspension cable ever used for a bridge, anchors in the superstructure itself rather than in the ground at either end. Deck sections are connected by hinge pipe beams that absorb the energy of an earthquake and minimize damage to the expansion joints. In addition, battered pile technology was utilized for driving foundation piles up to 91 meters down into the stiff soils of the San Francisco Bay.

To date, the East Span has won 21 national and international industry awards. These include the 2015 Outstanding Structure Award from the International Association for Bridge and Structural Engineers (IABSE), the 2015 George S. Richardson Medal for outstanding achievement in bridge engineering from the International Bridge Conference (IBC), and the 2014 America’s Transportation Award, Grand Prize and Best Use of Innovation Award, from the American Association of State Highway and Transportation Officials (AASHTO).

About FIDIC:
Founded in 1913, FIDIC is charged with promoting and implementing the consulting engineering industry’s strategic goals on behalf of its Member Associations and to disseminate information and resources of interest to its members. Today, FIDIC membership covers 97 countries of the world. To learn more, go to FIDIC.org.