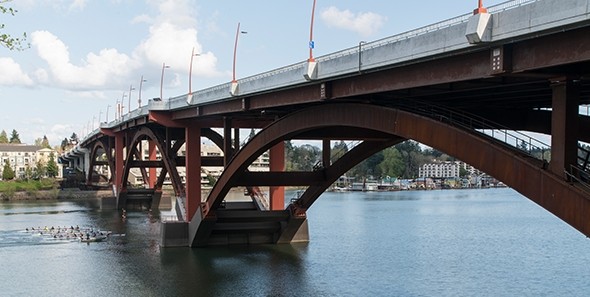 The Sellwood Bridge includes the main replacement bridge over Portland’s Willamette River and modernization of the Highway 43 interchange. The new 1,976-foot-long bridge, 1,275 feet of which comprises a steel deck arch, has three arch spans that support the 63- to 90-foot-wide deck of the main river spans. The bridge carries two 12-foot-wide vehicular lanes, two 6.5-foot-wide bike lanes/emergency shoulders, two 12-foot-wide shared-use sidewalks, and has been designed to accommodate future streetcar service.

The project also included stabilization of the hillside located west of the bridge and interchange. The existing bridge had landed on a geologically unstable area with a long history of movement toward the river, causing cracking in the columns and girders of the old approach spans. The locally preferred alternative for a steel deck arch, combined with the landslide condition, created a unique engineering challenge. TYLI, working with subconsultant Cornforth Consultants, developed an advanced solution that combined geotechnical design with a foundation design for the stability needed to found the deck arch against the west hillside.

Another challenge for the County was how to replace a major transportation route with minimal traffic disruption. The project team implemented an innovative design solution to enable the old bridge to remain in use during construction. The solution, which involved using temporary piers erected north of the existing bridge piers and sliding the 1,100-foot-long four-span continuous steel deck truss of the old bridge over to a detour alignment, allowed the replacement bridge to be built in one phase on the original bridge alignment. Due to the firm’s expertise in rapid bridge replacement projects, TYLI led the design of the temporary foundations for the detour bridge. Benefits included limiting bridge closure time to only six days and saving the County up to a year in construction time and over $10 million in project costs.

Local communities were involved in every phase of the bridge replacement project, with that input reflected in the final bridge design. TYLI also reduced the final bridge footprint significantly from early concepts, lowering project costs and minimizing environmental disturbances. Additionally, TYLI’s design for the new crossing is based on contemporary seismic codes, and satisfies both a 475-year return period event for operations and a 975-year return period for safety.