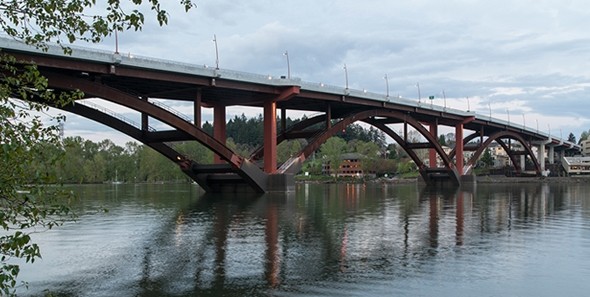 Completed on a fast-track schedule and replacing an historic crossing that was built in 1925, the bridge replacement project includes the new signature bridge across the Willamette River, modernization of the Highway 43 interchange, and stabilization of the hillside located west of and above the bridge and interchange. The Sellwood Bridge opened to traffic on February 29, 2016.

“T.Y. Lin International is honored that the Sellwood Bridge has won the 2017 Project of the Year and People’s Choice Awards from ACEC Oregon,” said David Goodyear, P.E., S.E., PEng, TYLI Senior Vice President and Chief Bridge Engineer. “Local communities were engaged in every phase of this major transportation project, with that input reflected in our final bridge design. The entire delivery team is proud to have created such an elegant, context-sensitive solution for the Sellwood neighborhood.”

The TYLI team reduced the final bridge footprint significantly from early concepts, reducing project costs and minimizing environmental disturbances. The locally preferred alternative for a steel deck arch, combined with a landslide condition for the west abutment, also created a unique engineering challenge. The TYLI team developed an advanced approach that combined geotechnical design with a foundation design for the stability needed to found the deck arch against the west hillside. While other landmark projects around the world have dealt with landslide movements, few if any others have included a true arch bridge design solution in addressing landslide movement.