“TYLI was charged with the design of new roadway improvements, coordination of the design with numerous agencies and adjacent design contracts, and completion of the project to meet the City’s construction bid letting schedule,” said Heather Gaffney, TYLI Senior Vice President and Central Region Director. “We are honored to have been involved in such an important project for the City of Chicago.”

Chicago’s Wacker Drive is a two-way, two-level roadway that connects a vital east-west artery within the Central Business District, Congress Parkway, to the City’s major north-south roadway along Lake Michigan, Lake Shore Drive. Because the area surrounding Congress Parkway has become one of the fastest-growing business, residential, and commercial areas in the City, there has also been a significant increase in the amount of pedestrian and vehicular traffic. In order to improve traffic flow, the Chicago Department of Transportation (CDOT) looked to TYLI to improve the functional operation of the Congress Parkway interchange; provide additional green space in the interchange area; increase the vertical clearance on lower Wacker Drive; and segregate lower Wacker Drive thru and service traffic.

Due to the urban setting of this large-scale project, extensive coordination was required between TYLI and local aldermen, city, state, and federal agencies, building owners, and numerous public and private utilities. The project, and its effect on vehicular and pedestrian traffic, as well as on residents and businesses in the area, was further compounded by its overlap with two concurrent, adjacent projects – the Illinois Department of Transportation’s rehabilitation of the Congress Bascule Bridge over the Chicago River and CDOT’s reconstruction of Congress Parkway from Wells Street east to Michigan Avenue. To meet CDOT project goals, TYLI remained actively engaged throughout the construction process.

“TYLI design engineers attended weekly construction meetings, made design revisions throughout construction to address unforeseen conditions, and responded to Contractor and other agency requests,” said Gaffney. “We were also deeply involved in the development of a traffic management plan that designated detour and alternate routes, signal timing changes, pavement marking revisions, and signing revisions to the intersections along the detour and alternate routes.”

Major design elements provided by TYLI include a post tensioned deck and interchange tunnel roofs, caissons and grade beams, ventilation systems for the interchange tunnels and lower Wacker Drive, a sprinkler system for the interchange tunnels, relocation of all existing public and private utilities, and landscaping. The project, which opened to traffic on November 30, 2012, now enables one of Chicago’s most traveled roadways to better serve the approximately 66,000 vehicles, 140,000 pedestrians and 11 bus routes that utilize Wacker Drive every day. 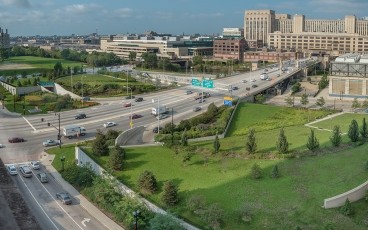