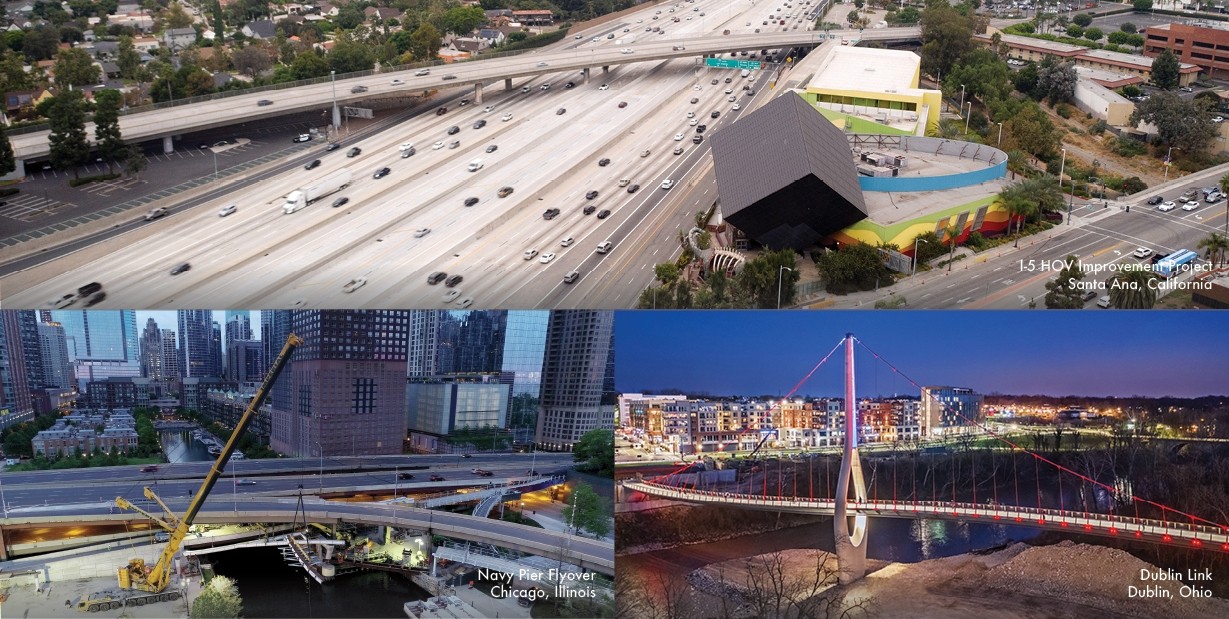 Created in 2000, Roads & Bridges' annual awards for Top 10 Bridges and Top 10 Roads recognize the top projects in North America based on project challenges, impact to the region, and scope of work.

TYLI served as Prime Consultant for the final bridge design for the new Dublin Link in Dublin, Ohio. The firm worked closely with the City of Dublin to develop the unique concept for the signature pedestrian bridge, which was the result of a collaboration between TYLI and the architect, Endrestudio of Emeryville, California. The Dublin Link serves as a critical transportation link for pedestrians and bicycles crossing the Scioto River.

The gracefully aesthetic, 760-foot-long Dublin Link follows an "S"-curve alignment, with a steel superstructure that passes through the "eye" of the concrete pylon tower without any vertical support. The deck is a steel box girder with an asymmetric "V" form, which changes shape as users cross while maintaining a 14-foot clear deck width from end to end. The pylon has a total height of 176 feet and measures a dramatic 110 feet high from the walking surface to the top of the tower.

TYLI served as Prime Design Consultant for the final design phase of the I-5 HOV Improvement Project, working in partnership with the Orange County Transportation Authority (OCTA), California Department of Transportation (Caltrans), and City of Santa Ana, California. The project added close to six lane miles of HOV lanes to a heavily congested portion of I-5, which will be traveled by 400,000 vehicles each day by 2035. The new, four-lane HOV segment opened to traffic in August 2020.

TYLI excelled at proactively identifying potential issues and risks, allowing sufficient time to develop resolutions and to partner with stakeholders in reaching a consensus on final decisions. By anticipating issues, the firm was able to save on project costs while meeting budget and schedule requirements.

TYLI was selected by the Chicago Department of Transportation (CDOT) to provide professional construction engineering services for the Navy Pier Flyover Lakefront Trail Improvements in the City of Chicago, Illinois. The project involved constructing an elevated multiuse path through a heavily-congested lakefront and urban area in three phases, with the first two phases extending from the north end of Jane Addams Park to the north end of the Chicago River Bridge. The third phase, which will span the Chicago River, connects the existing trail on the south side to the new "flyover" path on the north side.

Challenges overcome for the project include running the flyover structure between Lake Shore Drive and a high-rise building in a series of horizontal and vertical curves and constructing the flyover where it splits into a "Y." At the split, one path descends slightly upward and then down again to Navy Pier, while the other path begins an upward, twisting path between upper Lake Shore Drive and the high-rise building before descending to ground level at the northernmost point.

The flyover portion was preliminarily opened to pedestrians in 2019 and finished in early 2020, providing critical safety and convenience improvements to trail users. The flyover was opened in stages to provide benefits as soon as possible to users and allow work to continue. Work continues on the third phase of the Lakefront Trail project, which will provide a widened and improved trail across the Lake Shore Drive bascule bridge over the Chicago River. 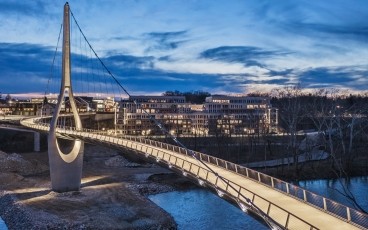 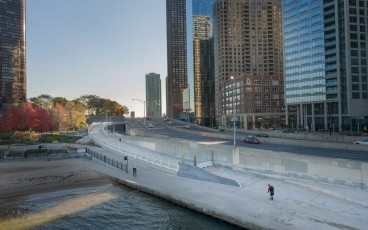