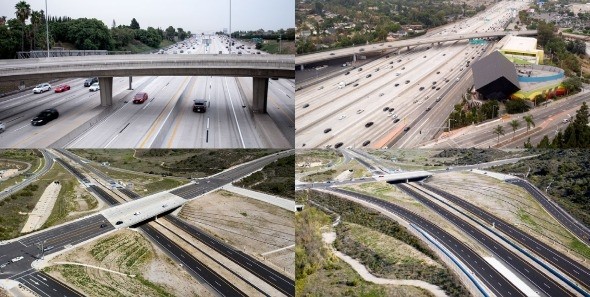 For the I-5 HOV Improvement Project, TYLI served as Prime Design Consultant for the final design phase, working closely with the Orange County Transportation Authority (OCTA), Caltrans, and the City of Santa Ana. The project provides a significant benefit to the traveling public by repurposing the existing width of the I-5 freeway and adding a second HOV lane in each direction between SR 55 and SR 57.

Opened in January 2021 on an extremely accelerated schedule, the Oso Parkway Bridge Project in Orange County provides vehicular traffic with a direct connection between Los Patrones Parkway and SR 241, improving safety, connectivity, and traffic flow. Previously, drivers had been forced to access SR 241 or Los Patrones Parkway by exiting via an off-ramp, waiting at a signalized intersection, and then using an on-ramp to access either roadway. The bridge provides six lanes (three in each direction) and dedicated bike lanes and pedestrian sidewalks to enhance user safety. A new sidewalk was also constructed on the south side of Oso Parkway for students to access Tesoro High School.

Project challenges included significant utility relocations due to bridge construction and right-of-way (ROW) processing requirements. Additionally, drainage design had to meet Orange County and Caltrans standards, based on various ownerships and ROW within the project limits.

TYLI also provided design support services during construction (DSDC) to the County on an as-needed basis. Staged construction included pedestrian detours to maintain a travel path for students at the adjacent Tesoro High School during each construction stage.

About the I-5 HOV Improvement Project (2021 Outstanding Construction Project):

Working closely with OCTA, Caltrans, and the City of Santa Ana, TYLI served as Prime Design Consultant for the final design phase of the $41.5 million I-5 HOV Improvement Project in Santa Ana, California.

Opened to traffic in August 2020, the I-5 HOV Improvement Project provides a significant benefit to the traveling public by repurposing the existing width of the I-5 freeway and adding a second HOV lane in each direction between SR 55 and SR 57. In total, the project added close to six lane miles of HOV lanes to a heavily congested portion of I-5, which will be traveled by 400,000 vehicles each day by 2035.

TYLI excelled at identifying potential issues and risks, partnering closely with stakeholders to reach a consensus on final decisions. This ability to be proactive allowed the project team to save on project costs while meeting budget and schedule requirements.

Another challenge concerned the Main Street HOV drop-ramp bridge structure demolition, which required full freeway closures. By collaborating with OCTA and Caltrans design and construction staff regarding demolition options, TYLI enabled the team to select a cost-effective solution that had a minimal impact on the traveling public: completing the demolition during a single weekend freeway closure.