T.Y. Lin International (TYLI) announces the completion of the $425 million track and station renewal project for one of the City of Chicago’s busiest transit lines – the Chicago Transit Authority (CTA) Red Line along the Dan Ryan Expressway. This project, for which TYLI provided complete design oversight, consisted of the total reconstruction of 10.2 miles of CTA track and the rehabilitation of eight stations from 95th Street north to the 15th Street crossover. TYLI was also the Designer of Record (DOR) for the corridor between 33rd Street and the 15th Street crossover. Project team member, TranSystems Corporation, was the DOR for the corridor from 33rd Street south to 95th Street. As part of Mayor Rahm Emanuel’s Build a New Chicago initiative, this 44-year-old segment of the Red Line, which was plagued by slow zones and delays, represented the largest overhaul in CTA history.

“This project required a team effort to meet the challenging schedule,” said Heather Gaffney, P.E., S.E., TYLI Senior Vice President and Central Region Director. “We are honored that T.Y. Lin International was involved in such an important project for the City of Chicago.”

The CTA Red Line project, funded by Governor Pat Quinn’s Illinois Jobs Now! program, was designed to be constructed in only 154 days. The decision to completely shut down the line for construction may have been the most critical component to the project’s success and positive public perception. The five-month shut down – as compared to a four-year weekend construction approach – created $75 million in savings, which was reinvested into station improvements and accessibility enhancements and provided an extensive alternate service throughout the project duration. The final outcome was a project that delivered over 10 miles of completely reconstructed double track on a system segment which, prior to construction, had approximately 40% of the line under slow zones. The improvement resulted in cutting the commute between 95th Street and Roosevelt Road by 20 minutes.

Given the project’s access constraints, which included the fact that the majority of the rail corridor is located in the middle of the I-90/94 Dan Ryan Expressway, and the extremely aggressive schedule, the design team was charged with incorporating elements into the project that minimized long-term maintenance while considering installation methods that could be executed expeditiously. With nearly 250,000 riders on an average weekday being rerouted with alternative service, it was essential to complete the project on time and to limit disruptions of service with future maintenance operations.

“The Dan Ryan Red Line Track and Station Renewal project had the unique opportunity to not only improve the CTA’s most heavily traveled line, but to also make a significant impact on the surrounding community,” said James Harper, P.E., CTA Chief Engineer. “The end product resulted in the elimination of all slow zones and created a faster, more comfortable ride for area residents who have come to rely on the Dan Ryan Red Line.”

Major design elements provided by TYLI and TranSystems included a new track bed, drainage system, ballast, ties, rail, third rail, and an extensive overhaul of the signal and communication system. Station improvements included architectural enhancements, construction of elevators at three stations, mechanical and plumbing repairs, lighting upgrades, and painting. The project, which opened to riders on October 20, 2013, now provides quicker trips, more frequent trains and more reliable service for the quarter of a million commuters who utilize this portion of the CTA Red Line every day. 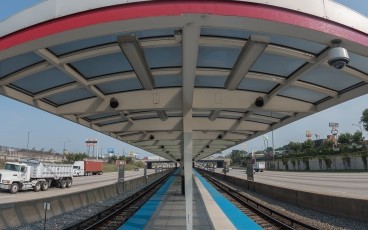