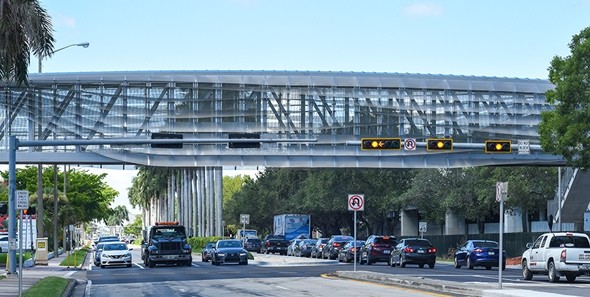 As Project Manager, TYLI’s scope of work included not only management of overall design team services, but also specific design coordination of the upfront architectural approach and final design for the structural span, mechanical and electrical engineering, lighting, and maintenance of traffic. The firm also led coordination efforts with Miami-Dade County DTPW, the City of Coral Gables (City), and other affected entities, including the Miami-Dade Building Department, the Transportation Aesthetics Review Committee, the Florida Department of Transportation, UM, and other local permitting agencies.

The initial conceptual study phase of the project began in 2006, and included bridge design, public involvement activities, construction documents, technical specifications, and preparation of the engineer's estimate of probable construction cost. TYLI held architectural concept coordination meetings with DTPW and the City to develop and receive approval on the details of the bridge supports and special design features integrated into the 125-foot-long structure.

TYLI’s context-sensitive design for the Pedestrian Overpass took into consideration numerous factors, including quality of life, sustainability, the cultural environment, and architectural styles. While the resulting structure is simple and efficient, its architectural character is unique. The elevator towers are stately masses clad in local fossilized limestone, reflective of the historic houses in the adjacent Coral Gables neighborhoods. The steel truss, however, is clad in a series of perforated metal fins that constantly change angles to create a flowing wave form, and is emblematic of the more contemporary architecture styles found at UM.

Since the U.S. 1/Mariposa Court intersection had been the site of a number of pedestrian fatalities or serious injuries over the past 20 years, safety remained a critical concern throughout the design, coordination, and implementation of the project. The signature wave feature was designed to make people curious about how the distinct form looks from all angles. This, in turn, accomplishes a key project goal: draw pedestrians and bicyclists to use the bridge, thereby keeping them safely off and away from the busy, six-lane highway below. 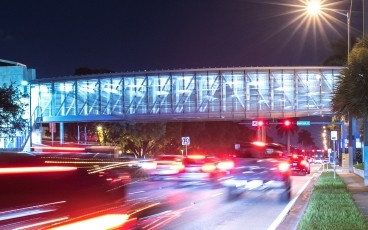