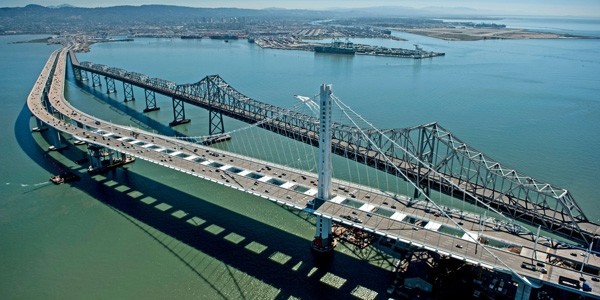 The new 2.2-mile-long East Span carries 300,000 vehicles each day and comprises four interrelated elements: the 2,047-foot-long, single-tower Self-Anchored Suspension Span (SAS); the 1.2-mile-long Skyway, which sweeps up from the Oakland shoreline to connect to the SAS; the Oakland Touchdown linking the Skyway to California’s Interstate 80; and the Yerba Buena Island Transition Structure connecting the SAS to the island.

Located in a high seismic zone, the East Span was designed to meet stringent seismic criteria, including the ability to open to emergency traffic shortly after the largest anticipated earthquake. Among the state-of-the-art and groundbreaking seismic engineering technologies incorporated into the structure, the SAS is the first suspension bridge to use fusible shear link beams to interconnect the four legs of its iconic, 525-foot-tall tower. The shear link beams allow the tower legs to move independently during an earthquake, absorbing most of the seismic energy. The SAS also utilizes a single, 4,550-foot-long suspension cable - the longest looped suspension cable ever used for a bridge. Because the Bay’s challenging geological conditions made it seismically and economically unfeasible to anchor a suspension cable system in the ground at either end of the structure, the main cable is anchored in the superstructure itself.

The parallel viaducts of the Skyway are segmental bridges, erected in balanced cantilever, with a typical span of 525 feet, and carry five westbound and five eastbound lanes. Throughout the decks of the East Span, expansion joints allow several feet of movement and hinge pipe beams transfer bending and shear across the expansion joints, with sacrificial fuse sections that absorb seismic energy and protect the structures during an earthquake. Skyway foundations were driven over 300 feet below the surface of the Bay to reach stable soils, utilizing a process used for creating secure foundations for offshore oil rigs.

"T.Y. Lin International, in a joint venture with Moffatt & Nichol, is proud to have played an important role in the iconic East Span project,” said Alvaro J. Piedrahita, P.E., TYLI President and Chief Executive Officer. “The design joint venture worked closely with Caltrans, the California Transportation Commission, and the Metropolitan Transportation Commission to deliver the design for a critical Lifeline Structure that is safe, seismically-resilient, and meets the aesthetic and functional demands of Bay Area communities."