T.Y. Lin International (TYLI), a globally recognized full-service infrastructure consulting firm, announces the completion of the Interstate 10 (I-10) Citrus Avenue Interchange Project in Fontana, California. As prime consultant to the San Bernardino Associated Governments (SANBAG), TYLI prepared final Plans, Specifications, and Estimates and provided construction support for the reconstruction of two important and heavily-congested I-10 intersections in the City of Fontana. On May 15, 2014, TYLI joined representatives and officials from SANBAG, the City of Fontana, the County of San Bernardino, and Caltrans for the grand opening ceremony for the I-10 Citrus Avenue Interchange.

Completed first, the I-10 Citrus Avenue Interchange will soon be followed by improvements to the adjacent I-10 Cherry Avenue Interchange. The overall project, which must be completed on-time to meet strict, accelerated deadlines, includes new loop ramps, reconstruction of two overcrossings at I-10, two overhead widenings over Union Pacific Railroad tracks, and major drainage channel improvements. The work included close coordination with a recently-constructed auxiliary lane between the two interchanges.

“Improvements to the I-10 Citrus Avenue and I-10 Cherry Avenue Interchanges will greatly reduce traffic congestion, increase public safety, and provide the City of Fontana with new opportunities for economic expansion,” said Clark Fernon, P.E., TYLI Vice President. “T.Y. Lin International is most pleased to be working with the San Bernardino Associated Governments and Caltrans to facilitate the future expansion of this rapidly-growing city.”

The operational capacity of the original interchanges, both of which were constructed to rural standards in the 1950’s, was severely challenged by the large traffic volume caused by subsequent development in the City of Fontana. To improve capacity for both locations, TYLI designed new westbound loop on-ramps and widened and realigned the other ramps. The existing overcrossing structures were also replaced with wider, longer bridges. TYLI developed a well-conceived construction staging plan to accomplish the work while minimizing impacts to the traveling public during construction.

Because Union Pacific Railroad’s mainline tracks are also adjacent to the freeway in this reach of I-10, the overhead bridges at both interchanges were also widened. TYLI was responsible for all coordination and processing with the railroad and Public Utilities Commission.

In addition, and working in conjunction with Caltrans District 8’s Landscape Architecture Branch, TYLI developed unique aesthetic concepts for the four bridges as well. These aesthetic treatments will become the prototype for application along the entire I-10 Corridor.

The improved I-10 Cherry Avenue Interchange project is expected to be completed in the winter of 2014. 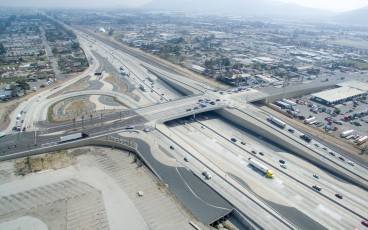