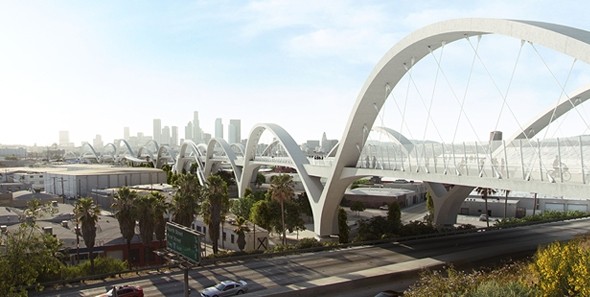 T.Y. Lin International (TYLI), a globally recognized full-service infrastructure consulting firm, announces that the City of Los Angeles Department of Public Works has awarded a contract to TYLI to provide construction management and engineering services for the development of the Sixth Street Viaduct Replacement Project. The new signature viaduct bridge will replace the existing Sixth Street Viaduct, which was constructed in 1936, and connect the City’s Arts District on the west side of the Los Angeles River and the historic neighborhood of Boyle Heights on the east side.

Recognized as an important city landmark, the existing Sixth Street Viaduct was built using reinforced concrete, with distinctive T‐beam/steel arch support at the center spans, and crosses close to 4000 feet in length over the Los Angeles River and State Route 101. Due to a chemical reaction known as Alkali Silica Reaction, the materials used to build the bridge are deteriorating significantly over time, threatening its long-term structural integrity. Studies indicate that there is a 70% chance that the original bridge could collapse during an earthquake over the next 50 years. The new Sixth Street Viaduct will not only be constructed to last for many decades, but the project will also incorporate one of the original viaduct’s characteristic arches into public space at the site.

The new Sixth Street Viaduct will consist of a 2,864‐foot‐long network tied‐arch continuous concrete viaduct bridge, along with a 193‐foot-long concrete box girder structure at the west approach. The bridge will carry four lanes of vehicle traffic (two lanes in each direction) and a bicycle/pedestrian path. The project also includes intersection improvements to relieve traffic congestion and the development of local parks, greenbelts, and community features near the bridge.

The $422 million Sixth Street Viaduct Replacement Project began construction on February 20, 2015 and is being headed by the City of Los Angeles Bureau of Engineering, working in partnership with the California Department of Transportation and the Federal Highway Administration. The new bridge is slated to open in 2019.