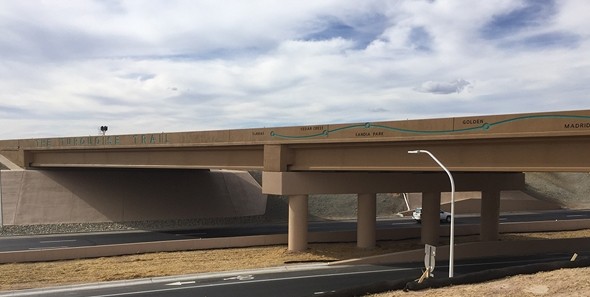 T.Y. Lin International (TYLI), a globally recognized full-service infrastructure consulting firm, announces that TYLI served as Bridge Lead on the new Diverging Diamond Interchange (DDI) at I-25 and NM 14 (Cerrillos Road) in Santa Fe, New Mexico. Working closely with the New Mexico Department of Transportation (NMDOT), and Molzen Corbin, the Prime Consultant, TYLI completed the structural design for two new prestressed concrete girder bridge structures to replace structurally deficient steel plate girder bridges along I-25. The Santa Fe DDI is the first interchange of its type in New Mexico and will reduce traffic congestion and increase safety and efficiency at one of the most important interchanges in the state. The new DDI opened on time and on budget in November 2016.

TYLI’s design for the two interstate bridges overcame significant challenges, including a compressed design schedule of only three months, phased construction to maintain a two-lane detour for I-25 traffic throughout construction, potential interaction with commuter railroad traffic, and the inclusion of a new multiuse/equestrian path. Because the existing girder bridge structures were used during construction as detours, the bridge design also had to allow the new bridges to be built wider to meet detour requirements and accommodate future three-lane interstate traffic with minimal modifications.

“T.Y. Lin International coordinated closely with the New Mexico Department of Transportation Bridge Bureau and the project team to ensure that the bridge design met the client’s fast-track schedule and all critical design criteria,” said Eric Froberg, P.E., TYLI New Mexico Operations Manager. “We are tremendously pleased to have contributed to the success of such an important and historic transportation infrastructure project for New Mexico.”

Unique design elements introduced by TYLI include reducing the number of spans on both bridges from three spans to two while maintaining the same structure depth. The design team also used a change in interstate roadway alignment to help reduce the differences in geometry between the two bridge structures. In many cases, this allowed a reduction in some design elements from two elements to one. For example, the alignment change created enough similarity between the bridges that the superstructures for both bridges were nearly identical, enabling a more efficient and timely design. TYLI economized precast concrete girder depth and spacing to facilitate construction phasing and reduce overall construction costs. The two-span configuration also allowed for the bridges to be shorter while still providing more clear space below the structures.

Per TYLI’s recommendation, the southbound roadway alignment was changed from a curve to a tangent and the northbound curve radius was increased to more closely mimic a straight line. This allowed the firm to design straight bridges, with the roadway striping accommodating the slight roadway curvature. While considerable upfront planning was required, this reduced design time and benefitted the overall project.