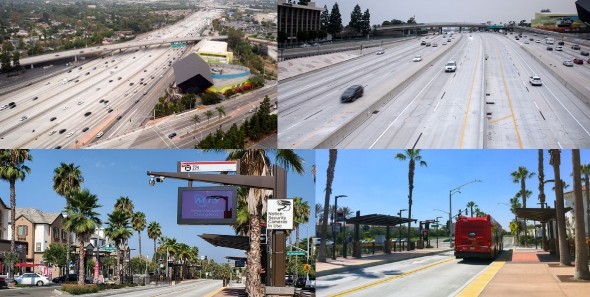 TYLI served as Prime Design Consultant for the final design phase of the Interstate 5 High-Occupancy Vehicle Improvement Project between State Route 55 and State Route 57 (I-5 HOV Improvement Project). The project provides a significant benefit to the traveling public by repurposing the existing width of the I-5 freeway and adding a second HOV lane in each direction between SR 55 and SR 57.

For the South Bay Bus Rapid Transit (South Bay BRT) project in Chula Vista, California, TYLI was contracted by the San Diego Association of Governments (SANDAG) to complete the final design of Segment 2 of the 22-mile-long transit system. The South Bay BRT runs buses in designated transit lanes and on dedicated guideways to provide reliable, on-time service that emulates rail service. Segment 2 includes approximately 1.5 miles of guideway, including a two-frame bridge over SR 125, as well as the Santa Venetia and Otay Ranch Town Center BRT stations within the Otay Ranch community.

About the I-5 HOV Improvement Project:

Working closely with the Orange County Transportation Authority (OCTA), California Department of Transportation (Caltrans), and the City of Santa Ana, TYLI served as Prime Design Consultant for the final design phase of the $41.5 million I-5 HOV Improvement Project in Santa Ana, California.

Opened to traffic in August 2020, the I-5 HOV Improvement Project provides a significant benefit to the traveling public by repurposing the existing width of the I-5 freeway and adding a second HOV lane in each direction between SR 55 and SR 57. In total, the project added close to six lane miles of HOV lanes to a heavily congested portion of I-5, which will be traveled by 400,000 vehicles each day by 2035.

TYLI excelled at proactively identifying potential issues and risks, allowing sufficient time to develop resolutions and to partner with stakeholders in reaching a consensus on final decisions. By anticipating issues, the firm was able to save on project costs while meeting budget and schedule requirements.

About the South Bay BRT Project:

TYLI was contracted by the San Diego Association of Governments (SANDAG) to complete the final design of Segment 2 of the South Bay BRT in Chula Vista, California. Segment 2 includes approximately 1.5 miles of dedicated guideway primarily along within the center median of East Palomar Street, beginning at the East Palomar Street/Olympic Parkway intersection, extending across SR 125 on a two-frame bridge, continuing along the northern edge of the Otay Ranch Town Center mall, and ending at East Lake Parkway on the east side of SR 125. The $20 million segment includes the Santa Venetia BRT station, the Otay Ranch Town Center Station, and the bridge over SR 125.

The 22-mile-long transit system runs buses in designated lanes and on dedicated guideways to provide reliable, on-time service designed to emulate rail service. The system stretches from the southern part of San Diego County, near the Otay Mesa crossing of the U.S.-Mexico border, to downtown San Diego.

TYLI's designs for the stations and the bridge over SR 125 used context-sensitive methods, holding aesthetics and community acceptance as high priorities. The Santa Venetia BRT station is located at the heart of a newly developed portion of the Otay Ranch community in Chula Vista that was planned as a transit-oriented development. The new station structure completes the intended community design by providing links to pedestrian walkways and bike paths that connect transit with nearby commercial and residential areas.

TYLI's design also ensured desirable elements such as shelters, benches, ticket vending machines, informational kiosks, platform lighting, fencing, and landscaping. These are intended to provide a complete user experience that is accessible, safe, and attractive to the surrounding community.

A portion of Segment 2 traverses a green belt between two condominium communities, which had been reserved for transit use. The proximity of the residential buildings was a key consideration driving a number of project features, such as bridge width, privacy walls along the guideway, lighting, and the need for a sound wall during construction.

To increase the distance between the guideway and the condos, the decision was made early on to reduce the width of the guideway through the green belt and over SR 125 to a single lane. This triggered the need for a complex bus detection and signaling system at each end of the bridge to prevent collisions. TYLI coordinated extensively with the Metropolitan Transit System (MTS), the City of Chula Vista, and SANDAG's ITS consultant to develop a safe and reliable solution.

For the portion of the guideway between the condominium communities, design details such as bridge lighting, soffit lighting, security cameras, aesthetic structure finishes, structure type, and privacy wall aesthetics were vetted and selected through extensive community outreach. The result is an open structure with a park-like area underneath that the community can access for recreational use.

The entire South Bay BRT system opened to public use in December 2020. 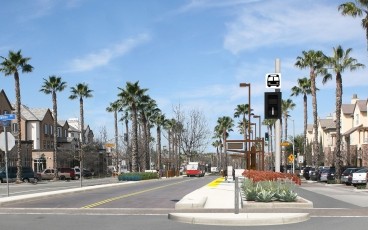