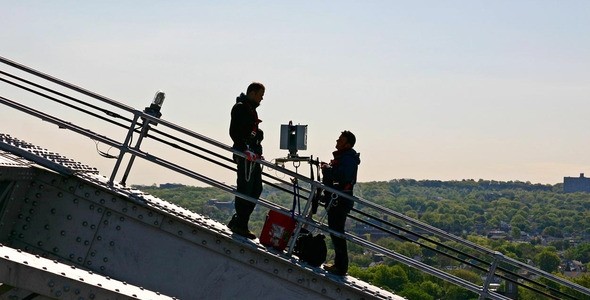 TYLI and the Port Authority of New York & New Jersey (the Authority) received the award at ACECNJ’s Engineering Excellence Awards held on March 14, 2012 in Monroe Township, New Jersey. The project was led by Joseph (Joe) Messina P.L.S. of the Hackettstown, New Jersey office.

The Bayonne Bridge was originally built in 1928, running between the southern tip of the Bayonne Peninsula and the north shore of Staten Island. Soon after commercial ferry service was initiated in the 1820's, towns grew on either side of the channel, developing a system of streets, rail lines and transportation terminals as extensions of the ferry. This waterway is among the busiest shipping channels in the world and the bridge has served the area for the past 80 years and has become an iconic symbol.

TYLI, working in conjunction with the Authority and the project design team was tasked with the effort to develop a comprehensive model of the existing bridge, specifically the two existing towers and the upper and lower arches. Due to the highly aggressive schedule required to meet the Authority’s requirements, TYLI proposed an innovative approach to combine the dual efforts of conventional CADD preparation of structural elements in conjunction with other team members and utilization of cutting edge technology - high definition survey (3D laser scanning). The deliverable included a complete BIM model of the bridge along with the complete point cloud model of the bridge. This benefit allowed the design team to have a virtual 3D as-built model of the bridge including actual rivet\bolt locations. Having this information in CADD also allowed the team to quickly share the information and allow other disciplines to work on the project simultaneously, reducing overall schedule. The combination of this approach allowed the team to reduce the project delivery by approximately three months.

The main challenges of this project were the short design timeframe, loss of numerous prior design documents due to 9/11, and the need to have a comprehensive three dimension model of the bridge. Logistics of the project site dictated the need for lane closures as well as capturing the scan data from the upper arches, which was the bigger challenge. TYLI’s survey team developed a project work flow and specific safety plan to acquire this information, including the development of a rigging jig to hold the scanner as it traveled along the pipe handrail for the span of the entire arch. The field teams completed the entire upper arch scanning in just four days.