T.Y. Lin International (TYLI), a globally recognized full-service infrastructure consulting firm, announces that TYLI was awarded the Program Management Contract for the 4th Bridge over the Panama Canal. Continuing the firm’s legacy in the Republic of Panama for the delivery of state-of-the-art transportation projects, the 4th Bridge over the Panama Canal marks TYLI’s third major bridge project involving crossings over the world-renowned canal. Over the last three decades, starting in 1994, TYLI has been assisting the Republic of Panama Ministry of Public Works (MOP) with the widening and retrofitting of the iconic Bridge of the Americas, which opened in 1962, and facilitating ongoing bridge repair and maintenance. The firm was also responsible for the feasibility study, preliminary design, and final design of the Centennial Bridge, also known as the Panama Canal Second Crossing, which opened to traffic in 2004.

TYLI will provide specialized technical assistance for the 4th Bridge over the Panama Canal project during the design, construction, and commissioning phases, ensuring the implementation of the objectives of the MOP. The bridge, which is surely destined to become yet another historic landmark for the country, will be built on the north side of the existing Bridge of the Americas, connecting west Panama with Panama City. Rising up from the landscape of the country’s urban center, the new crossing will benefit the more than 500,000 residents living in the suburbs of Panama City on the west side of the canal.

The 4th Bridge over the Panama Canal will incorporate the latest in bridge design and construction technologies, and feature two dramatic towers with multiple cable planes in a highly aesthetic configuration. The signature structure, with approximately 1,120 meters of cable-stayed main bridge and 1,500 meters of approaches, will include a 540-meter-long by 54-meter-wide main span across the Panama Canal. The multi-modal bridge will carry six lanes of vehicular traffic (three lanes in each direction), two-way rail lanes to be linked with the future Metro Line 3, and a pedestrian and bicycle path.

TYLI’s extensive history with Panama’s Metro Rail systems will also be a significant advantage, as this project will require close coordination with the rest of the country’s public transportation system. 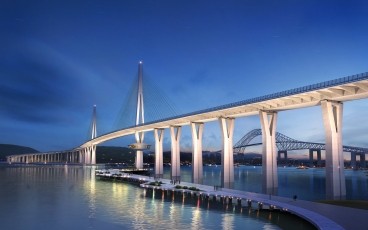