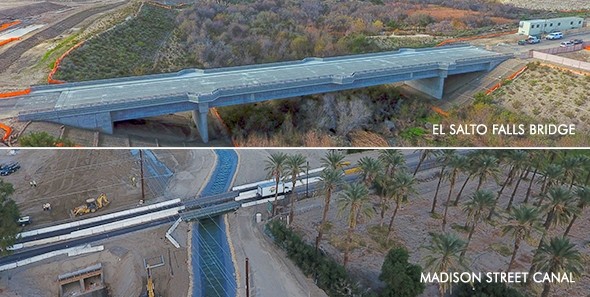 The annual Construction Management Project Achievement Awards program recognizes outstanding achievement in the practice of construction management. The program is designed to recognize and promote professionalism and excellence in the management of the construction process. TYLI joined its project partners in accepting the awards at the 2017 CMAA Awards Banquet and Scholarship Dinner on May 3, 2017, in San Diego, California.

TYLI was selected by the project owner, Cornerstone Communities, to develop plans, specifications, and estimates (PS&E) and oversee construction management for the new El Salto Falls Street Bridge over Buena Vista Creek in Carlsbad, California. El Salto Falls Street Bridge is a three-span spliced girder bridge connecting two sides of The Preserve at Carlsbad, a new housing development. The project was completed on schedule in August 2016.

In addition to the ESA restrictions, access from the top of the creek banks was limited to a 90-foot-wide construction easement. Utilizing three-stage accelerated bridge construction to meet the project’s tight schedule and budget, TYLI’s design plan implemented innovative construction methods to keep all work outside creek limits. These included the placement of the precast girders for the end spans cantilevered over the creek, 30 feet past the piers, and placement of the 120-foot-long center span girders using a two-crane operation and a midair hand-off over the creek.

Along with carrying pedestrian, bicycle, and vehicular traffic, the El Salto Falls Street Bridge supports two 12-inch-diameter water lines, a 6-inch-diameter recycled waterline, and a 12-inch-diameter gravity sewer line, which is suspended below the soffit of the bridge. Having the sewer line operational by the start of homebuilding on the north side of the bridge was critically important for the owner. To meet this requirement, TYLI adjusted the work plan to focus on the sewer line and other utilities under the bridge after the bridge main spans were installed, rather than concentrating efforts on completing the deck and bridge barriers.

To allow for RCB construction in the same alignment as the existing open canal, a temporary diversion channel diverted irrigation water and allowed for continuous service to Coachella Valley Water District (CVWD) customers. Prior to building the temporary channel, an existing CVWD 18-inch sewer force main was lowered and extended using the jack and bore method, with a sewer bypass plan installed to maintain service to customers. Additionally, a 30-inch irrigation lateral was relocated and a large drainage manhole was temporarily removed and capped to facilitate the channel through the busy intersection of Madison Street and Avenue 50.

With the intersection closed for two weeks during construction, temporary bridges were used to reopen Avenue 50 and maintain east-west travel over the channel and through the site. Upon completion of the RCB and construction of a new bridge at Avenue 50, water was transferred back to the new canal and the temporary diversion channel was closed. The Madison Street/Avenue 50 intersection was reconstructed prior to opening the permanent roadway to traffic.

Bringing a comprehensive grasp of local, state, and federal requirements to achieve conformance with City and CVWD requirements, the TYLI team overcame complex project challenges. These included the seamless revision of work windows to accommodate local music festivals; ensuring work area safety by using a 24-hour surveillance system to monitor the site; and meeting a special CVWD request to deepen and lengthen a sewer force main. The Madison Street Canal Improvements project was completed on schedule in February 2017.