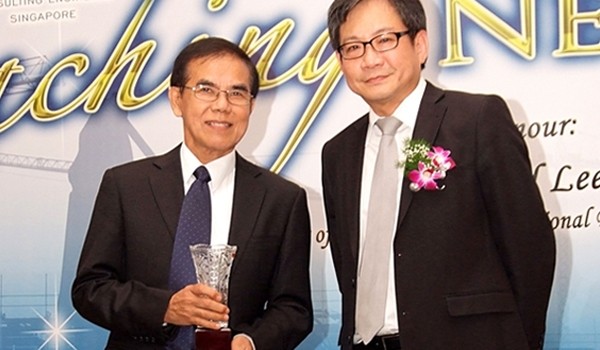 T.Y. Lin International Group, a globally recognized full-service infrastructure consulting firm, announces that Dr. Tan Guan, Senior Principal and Director of Building Structures for the firm’s Singapore office, T.Y. Lin International Pte. Ltd., has received a prestigious Lifetime Achievement Award from the Association of Consulting Engineers Singapore (ACES) for his contribution to the engineering profession and the association. The ACES Lifetime Achievement Award recognizes an individual’s contributions to engineering excellence and for setting standards of excellence to which others in the field may aspire. Koh Boon Liang, ACES President, presented the award to Dr. Tan at the ACES 43rd Anniversary Dinner on March 27, 2014.

With Mr. Desmond Lee Ti-Seng, Minister of State for the Government of Singapore’s Ministry of National Development, in attendance, and surrounded by his industry peers and colleagues, Dr. Tan was presented with the ACES Lifetime Achievement Award with comments that highlighted his extensive career accomplishments, his contribution to the industry and the profession, and his constant enthusiasm and tireless support in mentoring his peers in engineering practices and professional ethics and obligations.

“Dr. Tan Guan came to T.Y. Lin International in one of the first waves of design engineers recruited for the firm’s Singapore office in early 1973,” said Teh Hee Seang, T.Y. Lin International Pte. Ltd. Chairman. “Consistently instrumental in building and developing our Singapore operations, Dr. Tan is a technical leader and an expert project manager, and his passion for the profession is evident on a daily basis. We are deeply pleased that he has been recognized with a Lifetime Achievement Award from the Association of Consulting Engineers Singapore.”

Dr. Tan’s career accomplishments include an impressive list of complex engineering projects delivered over his 40 years in the civil and structural engineering industry. Specializing most recently in healthcare structures, he served as Project Director and Qualified Person for the design of the Mount Elizabeth Novena Hospital and the National University Hospital Medical Centre, two state-of-the-art healthcare facilities in Singapore. In 2013, Dr. Tan received the Building Construction Authority’s (BCA) Design and Engineering Safety Excellence Award for his role as Qualified Person in the delivery of the Mount Elizabeth Novena Hospital project.

Dr. Tan has also been involved in the delivery of numerous other building structures throughout Singapore, the Middle East, and Asia. He served as the Accredited Checker for the 70-story The Sails at Marina Bay and the National University of Singapore (NUS) University Town, and as the Qualified Person for Novena Square and the NUS Bukit Timah Campus. He has also led multiple mass rapid transit station projects and overseen the restoration of historical buildings, such as Singapore’s Victoria Theatre and Victoria Concert Hall. Other notable projects include Marina Tower in Beirut, Lebanon, and the Sabah International Convention Center and the Shah Alam Stadium, both in Malaysia. Currently, Dr. Tan is Project Director for the Shangri-La Hotel development in Colombo, Sri Lanka.

With a Doctorate degree in Civil Engineering from NUS, Dr. Tan is a registered Professional Engineer and Accredited Checker in Singapore. He is also a prominent member of the engineering community and has been instrumental in the development of the engineering profession in Singapore through the mentoring of his peers and his role on numerous councils and committees. Among his many association leadership positions, Dr. Tan was Honorary Secretary and Council Member of ACES (1999 to 2010), Board Member of the Professional Engineers Board (2006 to 2011), Chairman of the Technical Committee on Building Structures & Sub-structures (2004 to 2011), Member of the Building and Construction Standards Committee (2004 to 2011), and a Member of the BCA Accreditation Selection Panel (2004 to 2012). Dr. Tan received the Standards, Productivity and Innovation Board (SPRING) Singapore Distinguished Award in 2009 and 2012 for his active participation in the development of Singapore Standards.