T.Y. Lin International (TYLI), a globally recognized full-service infrastructure consulting firm, announces that TYLI has won the bid to provide the Detailed Design Engineering (DED) for the new Bataan-Cavite Interlink Bridge in the Philippines. The US$ 59 million contract was awarded to a joint venture of TYLI and the Republic of Korea’s Pyunghwa Engineering Consultants, working with Switzerland-based Renardet and the Philippines’ DCCD Engineering Corporation. The project includes a 32.15-kilometer-long, four-lane, cable-stayed bridge that will cross the Manila Bay and connect Barangay Alas-asin in Mariveles, Bataan, and Barangay Timalan, Naic, Cavite. The DED phase for the landmark bridge will be carried out over the next 15 months.

The Bataan-Cavite Interlink Bridge Project is led by the project owner, the Government of the Philippines, and will be implemented by the Department of Public Works and Highways (DPWH) of the Philippine government. The project is being developed with funding from the Asian Development Bank (ADB) and includes the construction of two cable-stayed navigation bridges. Called the North Channel Bridge and South Channel Bridge, the structures will have main spans of 400 meters and 900 meters, respectively. The marine bridges will stand in water as deep as 50 meters.

Benefits of the new Bataan-Cavite Interlink Bridge include reducing the current travel time between the provinces of Bataan and Cavite from five hours to 30 minutes or less and easing traffic congestion in the densely populated capital city of Manila. The bridge will also introduce new expansion and economic growth opportunities outside of Manila, such as developing seaports in Cavite and Bataan as major international shipping portals to the Philippines.

T.Y. Lin International’s pursuit of the Design-Bid-Build project was led by the firm’s Bridge Line of Business and represents a collaboration of bridge teams in the United States, Asia Pacific, and Europe. 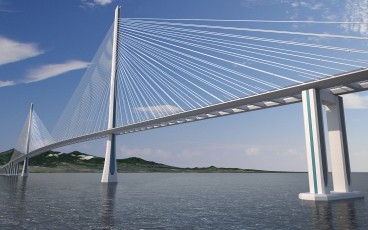