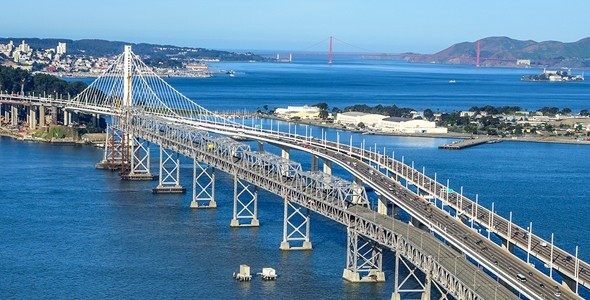 T.Y. Lin International (TYLI), a globally recognized full-service infrastructure consulting firm, announces that the San Francisco-Oakland Bay Bridge New East Span (East Span) has won the International Association for Bridge and Structural Engineering (IABSE) Outstanding Structure Award 2015. This prestigious, annual award is given to a single project that IABSE has named “the most remarkable, innovative, creative, or otherwise stimulating structure completed within the last few years” worldwide. TYLI, in a joint venture with Moffatt & Nichol, served as Engineer of Record on the East Span project and was responsible for the design engineering of the iconic, seismically-resilient bridge.

The IABSE Outstanding Structure Award Committee 2015 made the following statement about the East Span: “With a ground-breaking advanced bridge design, the San Francisco-Oakland Bay Bridge New East Span demonstrates how innovations in seismic engineering can become the bridge to making history.”

The East Span, which is located between two faults capable of producing destructive earthquakes, is a designated regional Lifeline Structure with a 150-year design life and designed to be able to open to emergency traffic shortly after a major seismic event. The signature bridge comprises four seamless, interrelated components: the world’s longest, single-tower Self-Anchored Suspension Span (SAS) at 624 meters, also the world’s widest bridge at 79 meters; the 1,900-meter Skyway, the longest East Span portion, which ascends from the Oakland shoreline to the SAS; the Oakland Touchdown, connecting the Skyway to a major California freeway; and the Yerba Buena Island Transition Structure (YBITS), which links the SAS to the east portal of the Yerba Buena Island (YBI) tunnel.

“We are deeply honored to have our work on San Francisco-Oakland Bay Bridge New East Span recognized by the International Association for Bridge and Structural Engineering,” said Marwan Nader, Ph.D., P.E., TYLI Senior Vice President, Technical Director for the firm’s global Bridge Line of Business, and Lead Design Engineer for the SAS. “This tremendous effort has led to a unique and elegant structure that is the perfect addition to the world-class bridges in the greater San Francisco Bay Area.”

Engineering innovations and advancements found in TYLI’s design of the East Span include the use of shear link beams in the single, 160-meter-tall SAS tower, which supply the distinctive tower with the required stiffness, absorb seismic energy, and limit damage in the tower shafts. A single, 1,387-meter-long looped suspension cable anchors in the SAS superstructure itself rather than in the ground at either end due to unique geological conditions.

The Skyway foundations comprise 2.5-meter-diameter raked piles that extend 90 meters below the water line to stable soil strata. For increased seismic resilience, 18-meter-long hinge pipe beams and specially-designed expansion joints were incorporated in the bridge decks to allow emergency traffic to cross the bridge after a major seismic event.

About the International Association for Bridge and Structural Engineering

The International Association for Bridge and Structural Engineering (IABSE) was founded in 1929, operates on a worldwide basis, and deals with all aspects of planning, design, construction, maintenance, and repair of civil engineering structures. The mission of IABSE is to exchange knowledge and to advance the practice of structural engineering worldwide in the service of the profession and society. To fulfill its mission, IABSE organizes conferences and publishes a high-quality journal, Structural Engineering International (SEI); publishes books reflecting the work of its Technical Groups; creates Working Groups, as required by new needs and technological progress; offers activities within National Groups of IABSE; supports Young Engineers with a program; and presents annual Awards in recognition.