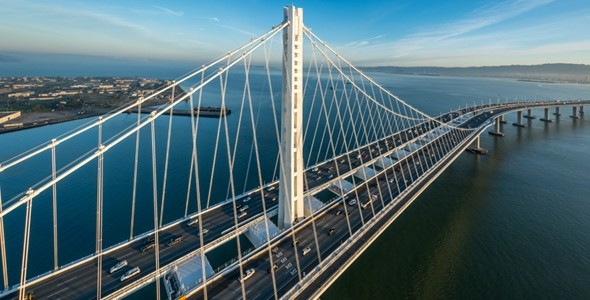 The 2.2-mile-long East Span, which opened to traffic on September 2, 2013, includes four distinct yet interrelated components: the world’s longest, single-tower Self-Anchored Suspension Span (SAS); the twin Skyway viaducts that ascend to the SAS from the Oakland shoreline; the Oakland Touchdown linking the Skyway to California’s Interstate 80; and the Yerba Buena Island Transition Structure connecting the SAS to the island.

Among the many seismic engineering innovations incorporated into the bridge design by TYLI engineers, the single tower of the SAS comprises four steel legs connected by fusible shear link beams. It is the first bridge of any kind to use fusible shear links in its tower to protect tower shafts during an earthquake. The East Span is also the first bridge on this scale to use a single, prebent, three-dimensional suspension cable. The 4,550-foot-long cable anchors in the superstructure itself rather than in the ground at either end due to challenging geological conditions. Deck sections are connected by hinge pipe beams that transfer bending and shear, absorbing seismic energy and protecting the main structure. For increased stability, foundation piles were driven up to 300 feet below the water’s surface to reach stable soils, using battered pile technology.

TYLI and its project partners received the APWA 2015 Project of the Year Award during APWA's 2015 International Public Works Congress & Exposition on August 31, 2015 in Phoenix, Arizona.