TYLin, a globally recognized full-service infrastructure consulting firm, announces that the I-95 Piscataqua River Bridge has won the 2022 Honor Award for Traffic Management and Planning in the American Council of Engineering Companies of Maine (ACEC Maine) Engineering Excellence Awards competition. The Maine Department of Transportation (Maine DOT) tasked TYLin to improve the safety of the bridge, develop rehabilitation designs, and identify a way to move more traffic through the corridor using the existing structure.

The busiest and most important bridge in the State of Maine, the I-95 Piscataqua River Bridge is only interstate highway connection between Maine and the rest of the country. The 4,503-foot-long through-arch structure is vital to freight traffic, commuters, and tourists and carries six lanes of Interstate 95 between Portsmouth, New Hampshire, and Kittery, Maine.

The project represents the first major rehabilitation of the bridge since its construction in 1972 and was completed with little to no impact on traffic. An average of 78,000 vehicles crosses the bridge each day. In the summer tourist season, daily traffic counts can rise to 130,000 or more, leading to regular traffic jams.

TYLin proposed an intelligent transportation system (ITS) to dynamically use emergency shoulders as a fourth traffic lane in each direction during peak traffic periods - a move that will greatly improve traffic flow. The bridge rehabilitation project has prepared the structure and its approaches for the ITS, which is expected to be installed by the New Hampshire Department of Transportation (NHDOT) by the end of 2023.

The greatest challenge of the USD 56.3 million bridge rehabilitation was keeping traffic and commerce moving freely during construction. Working closely with MaineDOT, NHDOT, and the Maine Turnpike Authority, TYLin developed an innovative traffic control approach. The firm evaluated the traffic levels at the site for every hour of every day of the year and then created an intricate, incentivized traffic control plan identifying when and where the contractor could perform the rehabilitation work with minimal traffic disruption.

The project utilized a movable temporary concrete barrier system that allowed lanes to be opened and closed quickly, multiple times each day. This rapid deployment maximized the contractor's time to work, shifting the focus as traffic dictated to keep cars and trucks moving while ensuring the safety of construction workers and the public.

This novel approach has only been used a few times nationally and had never been utilized on a project in Maine or New Hampshire. The solution worked exceptionally well, allowing this massive project to be completed with minimal impact on the public and no claims from the contractor. The project was completed ahead of schedule – a win for both travelers and MaineDOT.

“On behalf of TYLin and our project partners, we thank the American Council of Engineering Companies of Maine for this prestigious award,” said Daniel Myers, PE, TYLin Project Manager. “The iconic I-95 Piscataqua River Bridge is now in good condition and meets all current safety standards, which means everyone can feel safe and confident as they cross high above the Piscataqua River for many years to come.” 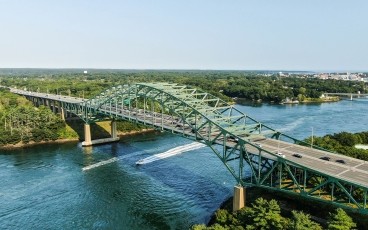