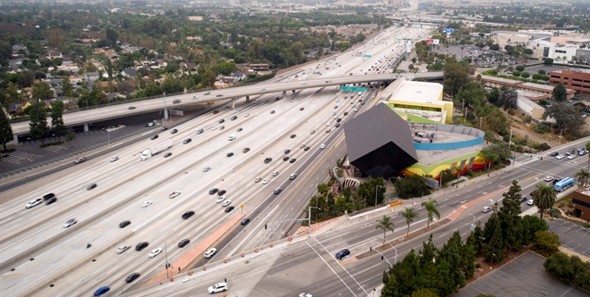 The $41.5 million I-5 HOV Improvement Project provides a significant benefit to the traveling public by repurposing the existing width of the I-5 freeway and adding a second HOV lane in each direction between the SR-55 and the SR-57. In total, the project added close to six lane miles of HOV lanes to a heavily congested portion of I-5, creating a four-lane HOV segment in the heart of Orange County. Now traveled by 380,000 drivers daily, traffic on this stretch is expected to climb to more than 400,000 vehicles a day by 2035.

The WTS Orange County Chapter Innovative Transportation Solutions Award salutes the creative work of an outstanding and innovative transportation project or service that involved a meaningful number of women from initiation to completion.

More than 35 women were actively involved in the I-5 HOV Improvement Project from start to completion. A total of 21 of these women were from TYLI, including Project Manager Karen Chapman, who recognized that a successful design would depend on the early identification of design issues and frequent and effective collaboration with all stakeholders to resolve challenges.

“Our team worked internally to identify potential design issues, and then began meeting in small groups on an as-needed basis with the affected Caltrans functional unit reviewers to develop solutions in partnership,” said Chapman. “We also used the project development team meetings as a venue to present technical issues and potential solutions. This approach required meeting with stakeholders around their schedules to ensure that decisions could be made inclusively and helped facilitate issue resolution.”

A noteworthy example of this involved the removal of the I-5 Main Street HOV on- and off-ramps. This was a unique and complicated demolition because the drop-ramp bridge structure was connected to a separate bridge that was to remain in place. The TYLI design team collaborated with OCTA and Caltrans design and construction staff to present demolition options and reach a consensus.

“The T.Y. Lin International design team took on the considerable challenges posed by this project and developed solutions in partnership with the entire project team. This not only resulted in the success of the I-5 HOV Improvement Project, but it also provided innovative solutions that can be considered on future projects - redefining how projects like this are typically approached,” added Chapman.

As an additional project benefit, the expected construction completion date was accelerated by at least four months. The project team evaluated and monitored traffic patterns to allow for expanded and extended lane closures. This led to the early completion of the project, saving tax dollars and bringing benefits to the public sooner.