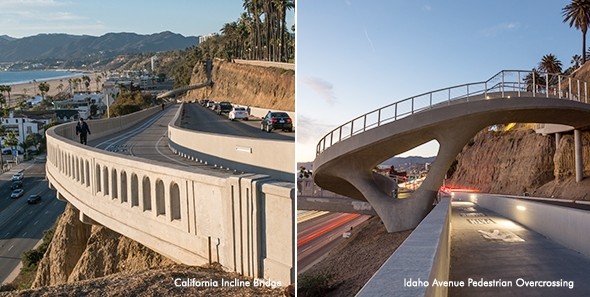 T.Y. Lin International (TYLI), a globally recognized, full-service infrastructure consulting firm, announces that two projects for the City of Santa Monica in California received 2017 Project of the Year Awards from the Metropolitan Los Angeles Branch of the American Society of Civil Engineers (ASCE MLAB). The California Incline Bridge Replacement was named Outstanding Road and Highway Project of the Year. The Idaho Avenue Pedestrian Overcrossing (POC) was selected as Outstanding Bridge Project of the Year. The ASCE MLAB Awards recognize projects that further advance the field of civil engineering and provide an exemplary display of the ASCE values. The awards were presented at the ASCE MLAB 2017 Awards Dinner in Los Angeles on August 4, 2017.

TYLI served as Lead Designer for the new California Incline Bridge and associated design improvements, which included the roadway, a multiuse bicycle/pedestrian path, drainage, and the replacement of a 12-inch water main. The TYLI team also oversaw traffic and electrical engineering, geotechnical engineering, hazardous material testing, and surveying. The 750-foot-long, cast-in-place concrete post-tensioned slab bridge replaces a series of deteriorating sidehill viaduct structures built in 1930. The seismically resilient bridge begins atop the bluff slopes of Pacific Palisades Park and carries vehicular traffic, pedestrians, and bicyclists down to the Pacific Coast Highway at the base of the bluffs near Santa Monica State Beach.

For the new Idaho Avenue POC, TYLI served as Prime Consultant, providing concept alternatives analysis, architectural design and visualization, final engineering, and construction support for the overcrossing and improvements to the Idaho Trail. An aesthetic, curving structure with signature V-shaped pier, the overcrossing emerges seamlessly from the historic Idaho Trail and spirals down to connect to the new multiuse bicycle/pedestrian path constructed for the new California Incline Bridge.

“From the onset, the T.Y. Lin International team was dedicated to overcoming challenging site conditions in order to provide the City of Santa Monica and local residents with the most structurally sound, efficient, and visually aesthetic structures possible,” said Mark Ashley, P.E., TYLI Senior Vice President and West Region Director. “We are honored that the California Incline Bridge and Idaho Avenue Pedestrian Overcrossing have been named 2017 Projects of the Year by ASCE.”

About the California Incline Bridge:

Replacing a series of five sidehill viaducts, the California Incline Bridge cuts through the steep shoreline slopes of Pacific Palisades Park and connects the intersection of Ocean and California Avenues at the top of the bluffs to SR-1/Pacific Coast Highway at the base. The bridge consists of a 750-foot-long, cast-in-place concrete post-tensioned slab structure that has a total width of 52 feet to provide space for vehicular traffic and a barrier-separated bicycle/pedestrian path.

The California Incline Bridge has been designed to accommodate the site’s corrosive marine environment and high seismic demands, including up to 20 feet of potential bluff erosion that could occur over its 75-year life span. Because the coastal bluffs constitute a protected resource, the bridge spans and 96 deep concrete piles were specifically located to minimize damage and erosion. Over 1,000 soil nails were installed in the slopes above the roadway to increase stability.

Structural design also called for the replacement of a 12-inch water main in the roadway and under the bridge, with bridge piles adjusted to avoid conflict with the waterline. Flexible high-density polyethylene (HDPE) pipe was used to allow replacement of the portion of the waterline under the bridge. TYLI also designed a temporary “high line” to maintain water service for residents during construction.

Aesthetic elements include the bridge railing, which replicates the historic balustrade railing of the original bridge, as well as a decorative overhang and corbels. LED lighting has been placed along the barrier-separated multimodal bicycle/pedestrian path. Additionally, the original bridge had a neon “Santa Monica” sign that was a landmark feature of the California Incline. The City of Santa Monica had the original sign refurbished and placed on a monument custom-designed by TYLI, once again giving the sign prominent exposure on the roadway.

About the Idaho Avenue Pedestrian Overcrossing:

Replacing an existing overcrossing, the Idaho Avenue POC extends from the Idaho Trail in Pacific Palisades Park and corkscrews tightly around the vertical clearance envelope of the California Incline roadway. The sculptural profile is reminiscent of a nautilus shell, facilitating its connection to the marine environment. Design challenges met included working with an existing trail with a steep 10% grade, space limitations over the California Incline roadway, the bridge location between steep, erodible cliffs and the City property line, and a large elevation drop between the popular trail and the roadway.

At the start of the project, TYLI provided a detailed structural assessment report that drove the City’s decision to replace the original structure. The design team then presented a variety of concepts and architectural renderings, of which three were chosen by the City for presentation to the general public. Following public selection, TYLI provided final engineering of the selected replacement alternative.

The primary architectural feature of the Idaho Avenue POC is the highly curved V-pier on the west side of the roadway, which provides a “window” to views of the Santa Monica Pier and the Pacific Ocean. TYLI worked closely with the contractor, providing 3D model files to enable the contractor to construct accurate forms for the V-Pier. The cantilevered deck of the bridge is accentuated by a transparent, LED-lit cable railing that minimizes view obstructions.

The bridge ends with a code-compliant staircase that transitions gracefully from the trail grade and progressively widens on the decent. TYLI also redesigned the Idaho Trail to minimize maintenance and erosion, including the design of a new drainage system. 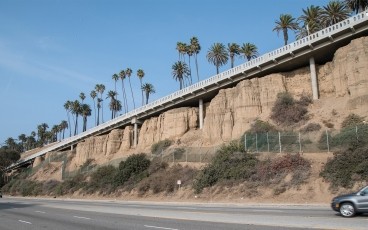