T.Y. Lin International (TYLI), a globally recognized full-service infrastructure consulting firm, announces that the joint venture of Pulice Construction, Inc., FNF Construction, Inc., and Flatiron Constructors, Inc. (Pulice-FNF-Flatiron Joint Venture), with TYLI as the lead designer, has been selected as the Design-Build developer team for the I-10 Broadway Curve Improvement Project for the Arizona Department of Transportation (ADOT).

TYLI and its teaming partners were selected over two other finalists after an extensive review by ADOT, the Cities of Phoenix and Tempe, and the Maricopa Association of Governments. Key selection elements included innovation and the development of alternative concepts to reduce project time and impacts on the traveling public and local communities during construction.

The I-10 between the I-17 “Split” interchange and the Loop 202 Santan and South Mountain Freeways spans the cities of Phoenix, Chandler, and Tempe, and the town of Guadalupe. The 11-mile segment includes the Broadway Curve area between Baseline Road and 40th Street. This fast-growing freeway segment, one of Arizona’s Key Commerce Corridors, is also the busiest in the state, carrying over 300,000 vehicles through the Broadway Curve daily.

As the Lead Design Firm, TYLI worked alongside its joint venture teaming partners during the Request for Proposal (RFP) phase to develop an innovative concept using 3D renderings to include all of ADOT’s planned improvements. Improvements include: widening I-10 to six general-purpose and two high-occupancy vehicle (HOV) lanes between 24th Street and U.S. 60; building a collector-distributor road system between Baseline Road and 40th Street; adding a fourth general-purpose lane from U.S. 60 to Ray Road, keeping the HOV lane; modifying I-10 connections to improve traffic flow and safety; replacing interchange ramps; and adding two bridges over I-10 for pedestrians and bicyclists.

Construction for the I-10 Broadway Curve Improvement Project is scheduled to begin in mid to late 2021 and last up to four years. 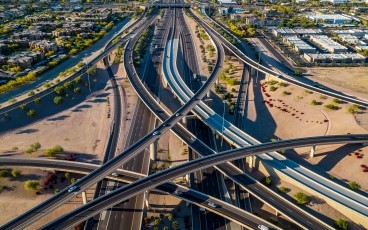