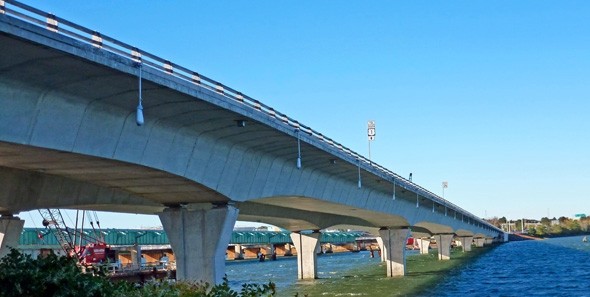 T.Y. Lin International (TYLI), a globally recognized full-service infrastructure consulting firm, announces that it has received a 2013 American Segmental Bridge Institute (ASBI) “Bridge Award of Excellence” for the new Veterans Memorial Bridge in Portland, ME. The ASBI Bridge Awards of Excellence recognize the owners of bridges whose structures exemplify concrete segmental bridge design and construction excellence. Judging criteria included innovation of design and construction; aesthetics and harmony with the environment; cost competitiveness; and minimization of construction impact to the traveling public. TYLI joined project owner, the Maine Department of Transportation (MaineDOT), in receiving the prestigious award at the 2013 ASBI Annual Convention held on October 28th in Portland, OR.

“We are very pleased that the MaineDOT has been honored by ASBI for this tremendous project,” said Jeff Andrews, Senior Vice President and TYLI’s New England District Director. “TYLI’s goal was to provide the people of Portland and South Portland with a well-engineered bridge that made a vital transportation connection safer and more efficient, and resulted in a landmark span that enhances the landscape of both cities. The new Veterans Memorial Bridge succeeds on all fronts.”

Stretching more than one-third of a mile across the Fore River, the new 1,610-ft. Veterans Memorial Bridge replaced an older structure that had been built in 1954. The $64 million crossing was designed for at least 100 years of service and built using 361 pieces of precast concrete. The design-build project was awarded by MaineDOT to TYLI and contractors, Reed & Reed, both located in Maine.

TYLI’s innovative design positioned the replacement bridge on a new alignment, which reduced the overall length of the new structure by nearly 800 feet and enabled the old bridge to remain in service during construction. This greatly reduced impact on the 22,000 vehicles that utilize the bridge each day and minimized work over and adjacent to an active railroad. The bridge design will also accommodate the possible addition of light rail or streetcars in the future.

Among its aesthetic features, the bridge includes a 12-ft. wide dedicated path for pedestrians and cyclists that widens at three points into scenic overlooks over the Fore River toward Casco Bay and Portland Harbor. Curved concrete walls divide the path from the motorway, topped with arced metal poles that appear to wave in a sinuous pattern. Special lighting on the bridge also highlights the arched concrete segments at night. Like the older structure it replaced, the new Veterans Memorial Bridge is dedicated to Maine’s veterans of the armed forces and Merchant Marines, with visually-compelling memorials positioned on both sides of the bridge.