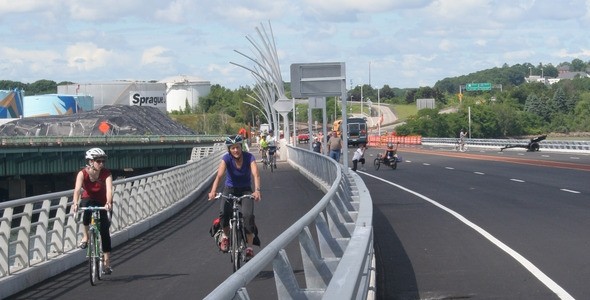 T.Y. Lin International (TYLI), a globally recognized full-service infrastructure consulting firm, announces that the new Veterans Memorial Bridge, one of Maine’s most heavily traveled bridges connecting the cities of Portland and South Portland over the Fore River, is now complete and open to traffic. Built with 361 pieces of precast concrete, the 1,610-ft bridge stretches more than one-third of a mile across the Fore River.

The new $65 million bridge replaces an older structure which was built in 1954 and was showing signs of having met its life expectancy. The design-build project was awarded by MaineDOT to TYLI and contractors, Reed & Reed, both located in Maine. The Reed & Reed /TYLI proposal presented the lowest price and the highest technical score. The new structure was designed for at least 100 years of service and was completed ahead of schedule and on budget.

“TYLI’s designers were able to place the bridge on an innovative new alignment, reducing the overall length of the new structure by nearly 800 feet and allowing the old bridge to remain in service during construction. The design greatly reduced impact of the 22,000 vehicles using the bridge each day and minimized work over and adjacent to an active railroad,” said Jeffrey Andrews, P.E., Senior Vice President and TYLI’s New England District Director. “The new bridge is also a more visibly compelling structure, providing Portland and South Portland with a signature bridge for an important transportation link.”

Since the bridge was to be a signature structure, the design process included significant public involvement throughout the project. When the project began in the spring of 2010, a series of public workshops were held in order to invite community input on elements of the bridge that were important to the various stakeholder groups, including pedestrians, bicyclists, veterans groups and area residents.

TYLI’s design includes a 12-foot wide dedicated path for walkers and bicyclists, which connects to an existing parkway trail system and widens at three points into scenic outlooks over the Fore River toward Casco Bay and Portland Harbor. TYLI also incorporated curved concrete walls to divide the path from the motorway topped with gently arced metal poles that appear to wave in a sinuous pattern.

The precast, segmental concrete bridge is designed for two lanes of traffic in each direction and a new left turn lane at the north end, ensuring an improved level of service at the busy intersections found there. The superstructure comprises two parallel box girders supported by independent columns, the tops of which flare out to meet and blend into the superstructure, further enhancing the bridge’s elegant profile. The bridge also includes a number of features to ensure long-term durability and corrosion protection and minimize maintenance costs. This is especially important as the structure is located over salt water in a harsh cold-weather environment.

Like the older structure it replaces, the new bridge has been dedicated to veterans. There are memorials positioned on both sides of the bridge which honor Maine’s armed forces and Merchant Marine veterans. The grand opening ceremony, which took place June 28, 2012, was attended by retired Army Col. Jack Stern, a veteran of the Korean War; John Jansen, chief of staff of the Maine Army National Guard; and a procession of 50 soldiers from the Maine Army National Guard. Among the officials present at the dedication were Portland’s Mayor Michael Brennan; South Portland’s Mayor Patricia Smith; Victor Mendez, Federal Highway Administrator; and Maine’s First Lady, Ann LePage.

“Our goal was to provide a new bridge location and alignment that would make this important parkway a safer, more popular and more efficient entry point to the cities it connects,” said Andrews. “The result is a beautiful, well-engineered signature bridge that meets both the transportation needs and aesthetic requirements of the people of Portland and South Portland.”